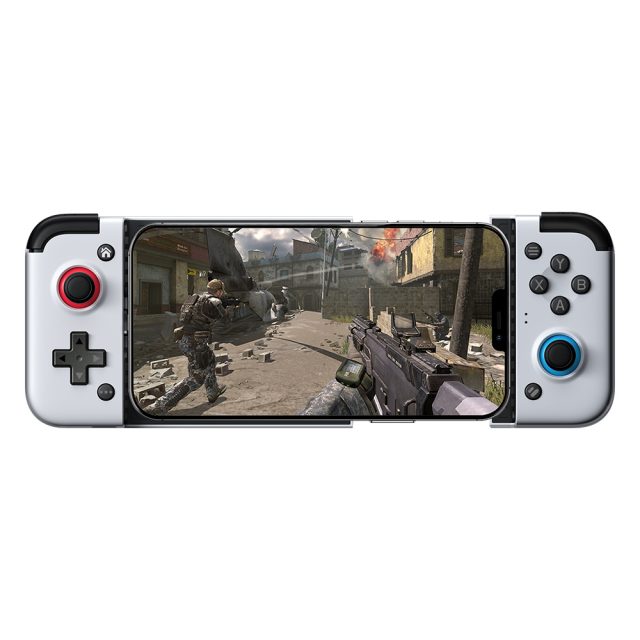 GameSir launched its new X2 Lightning model of the incredibly popular GameSir X2 mobile gaming controller recently. It is fully compatible with iPhones on iOS 13 and above.

The X2 Lightning version is compatible with Apple Arcade and MFi games and like its predecessors, is designed to provide a full array of controls. Thanks to the direct connection, lag is minimized to deliver the ultimate gaming experience. With iPhones getting bigger and more powerful to ensure they can handle the ever-increasingly complex games played on them, the X2 Lightning version will keep gamers ahead of delay, for the smoothest gameplay experience.

The GameSir X2 Lightning Mobile Gaming Controller is designed to work exclusively with the iPhone by it uses a Lightning connector. X2 Lightning is a split-game controller for iPhone with a charging pass-through and turbo button.
GameSir introduced the X2 Lightning controller as an extension of its popular USB-C and Bluetooth game controllers. It offers standard ABXY face buttons and responsive trigger buttons that use microswitches for maximum responsiveness.

Mobile gaming can also be console-style. In this case, GameSir equips X2 lightning with well-designed parts for making your gaming way more robust. The Soft rubber grip makes it more grip-friendly than the iPhone itself, providing enough comfort, especially during long sessions.

There are Micro switch buttons that have a span of three million clicks, and the clean crisp click enables you to forget that it’s playing on the phone. And clickable L3, R3 buttons offer additional input options. Thanks to the rotatable Lightning plug, it’s not stiff but more flexible when plugging in. Just tilt and slot, easy and worry-free.

The controller slides out to accommodate any iPhone up to 6,81 inches, so there’s room for future larger devices. The Lightning plug rotates when you insert or remove the device to make it easier to attach/detach. The turbo button is unique to the X2 Lightning. It has three turbo speeds that the user can switch on the fly.

On classic consoles like the Sega Genesis, the turbo will be used to repeatedly press buttons when some buttons are held down. Modern games are not designed with turbo features in mind, so the reason for this feature is unknown.
The X2 Lightning has joined the ranks of several similar controllers such as the Backbone One. It seems that this style of controller is targeting extendable nozzles and pass-through charging as its key features.

With a superb controller, games can also not be too less to expand your skills. X2 Lightning is ready for multiple games, including MFi and Apple Arcade games. Popular cloud gaming platforms can also be supported, including Microsoft’s xCloud, Google’s stadia, Vortex, Xbox game pass, etc.

For gamers requiring the option to play anytime whilst charging their devices, the X2 Lightning controller now includes pass-through charging, allowing gamers to play anywhere the mood for gaming arises, so non-stop gaming is truly guaranteed.