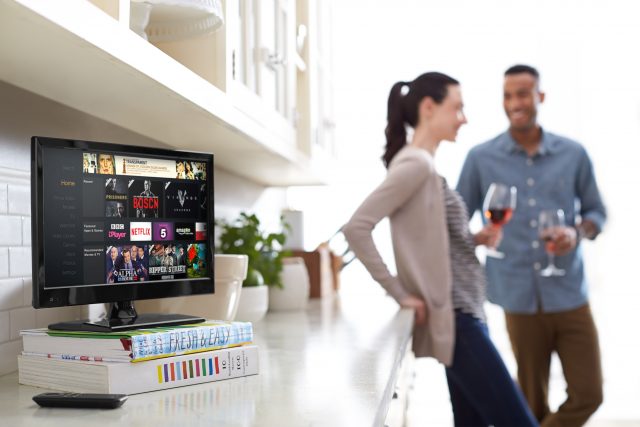 If you thought the Chromecast was an impressive piece of tech, you need to take a look at Amazon’s latest entry into its Fire TV line, the Fire TV Stick. It features the same dongle-like look of Google’s streamer, but gives you more power, an actual user-interface and a fantastic little remote. Oh, and it only costs £35.

There are so many ways to make your dumb TV into a smart one. You could plump for Apple’s recently discounted Apple TV, Google’s Nexus Player or one of Roku’s bevy of streaming boxes. But, even at their cheapest, these devices will set you back more than £50. If you want something truly affordable, you need to a streaming stick.

This idea was first introduced by Google. The brand’s diminutive Chromecast plugged directly into the HDMI port on the back of your TV and let you beam content directly from supported apps. It was great, but it lacked a UI of any kind and completely relied on you having a phone or tablet handy.

Roku then released the Streaming Stick. A similar proposition, but with the familiar Roku UI and remote. Again, it was great. But after time it began to get really slow. There just wasn’t enough grunt in that purple dongle.

Amazon’s Fire TV Stick is a simple looking thing. Imagine a matte-black USB stick or less curvaceous Chromecast and that’s it. There’s a Micro-USB port on the side for power, Amazon recommends you use the included power brick, and there’s a handy HDMI extender in the box too.

You plug the unit into an HDMI port on your TV, the USB cable in the mains and you’re all set.

Set-up is straightforward and just a case of connecting to your home network, inputting your Amazon log-in details and downloading any apps you want from the Amazon App Store.

One particularly cool feature Amazon has added is the ability to join ‘Portal Networks’. This means you can take the Fire TV Stick and jump onto the Wifi, without the internal log-in pages standing in your way. If you’re a regular hotel hopper, this could mean a saviour from bad TV and overly expensive PPV movies.

Unlike the Roku Streaming Stick or Google Chromecast, the Fire TV stick has plenty of grunt under the hood. There’s a dual core processor, 1GB RAM and 8GB internal storage, plus dual-band Wifi for hopping onto those faster networks.

You’ll notice this extra power as soon as you boot the stick up. It’s fast. Scrolling through menus, opening up apps and loading up video is done at a brisk pace and there’s barely any noticeable lag. Yes, it doesn’t quite match up to the Fire TV, which the double the RAM and a quad-core processor, but you probably won’t notice the difference unless you have both devices side by side.

This slight drop in power from the original Fire TV box means that you won’t be able to play those really graphically intense games, instead you’re stuck with far more casual titles, like Crossy Road and Tetris. But, if you’re mainly going to be using this as a media streamer, that’s a non-issue.

We think Amazon has got it right when it comes to the user-interface. It’s not as flashy as Google TV, but it is easier to get around and less ‘in your face’. It’s also far better than the boring, vastly aged UI on the Apple TV, though that’s hardly saying anything.

Along the top you’ve got quick access to some of Amazon’s promoted Prime shows, while clicking down the side will take into more specific categories. TV shows, Films and Apps, for instance. It’s definitely a text light, picture heavy interface and its easy to jump into separate apps, which we’ll get more into later.

The main issue is that the entire homescreen revolves around Amazon services. Adverts and artwork for Prime shows are everywhere, which is fine if you’re subscriber, but less so if you’ve decided to put all your streaming eggs in the Netflix basket.

Our other major quibble comes with the search function. Unlike its bigger brother, the Fire TV stick doesn’t come with a nifty voice reading remote (you can buy it for an extra £25, but that’s just bonkers considering the price of the stick) so all your searching is done via the on-screen keyboard. That’s fine, but the issue is that search functionality is limited. Results will only appear for content from Amazon, not from other services you have installed like Netflix and BBC iPlayer. That’s a shame, as universal search is a killer feature that we love on the Roku.

Let’s just get this out the way first, the Fire TV Stick supports Netflix. So you’re not entirely restricted to Amazon’s streaming service.

If you subscribe to both services, even better. Amazon Prime has come a long way recently and it’s producing some really rather fantastic shows. Its last ‘Pilot Season’ threw up a couple of gems including a remake of the criminally under-rated Sky One show ‘Mad Dogs’ and a take on Philip K Dick’s ‘The Man in the High Castle’. You should also check out Bosch, a classy and incredibly well shot Police drama/thriller.

Along with these two streaming big boys you’ve got access to BBC iPlayer, 5 on Demand, Spotify for your tunes along with Vimeo and Vevo. There’s a full featured Plex app too, plus one for WWE’s new Network.

It is missing some big ones though. You don’t get a fully featured YouTube app and ITV Player, All 4 and Sky’s Now TV are all M.I.A. That last one is a big disappointment, as having access to Now TV would make this a real option for cord cutters.

Support for multiple streaming services would be rather pointless if the video quality they produced was poor, but thankfully the Fire TV Stick impresses here too.

Prime and Netflix videos look ace, coming through at 1080p you’d probably expect as much. Amazon also manages to keep buffering on Prime and Instant Video streams to a minimum, thanks to some nifty software tweaking called ASAP.

iPlayer looks adequate, though you’ll need to manually alter the settings to HD every time and 5 on Demand looks fairly mediocre. But, we’re sure we can live with SD stream of Home and Away or Neighbours anyway.

Alongside the Stick itself, you also get a rather excellent little remote. For, you know, controlling the thing.

It’s a thin black controller with a clicky directional pad and an assortment of other buttons. It’s pretty much what you’d expect from a media streamer remote, but we always prefer to have a remote than be without.

You can also use Amazon’s Fire TV app, available from Google Play, Amazon’s own Android store and the iOS App Store, as a virtual controller. Using the app is fine, scrolling with the touchscreen is a little more clumsy than with the physical remote but at least you can use your phone’s keyboard for text entry.

The app also lets you use voice control, which is accurate and responsive, but restricted to Amazon’s own content.

There’s a lot to like about Amazon’s Fire TV Stick.

It’s small, portable, powerful and really cheap. At £35 this is the best way to easily turn any old HDTV into a smart one.

There’s also plenty of support for other streaming services, but you’re not going to get the most out of it unless you enrol yourself into Amazon’s ecosystem.

That’s the sticking point though, if you don’t plan on becoming a Prime member you’re really not going to get most out of this device. But, that’s what Amazon wants. It’s able to sell this device so cheap because it hopes you’ll throw an extra £79 a year at it for all the Prime benefits.