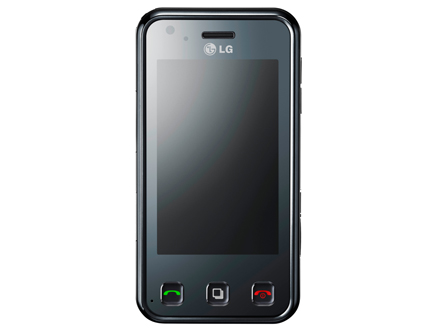 If you liked LG’s Viewty then that chances are that you will go out and buy LG’s new touchscreen phone, the Renoir. That’s if of course you can’t afford/be bothered to buy an Apple iPhone.

In what must be an improvement on the Viewty’s design, the Renoir looks more refined but still lacks the quality that the iPhone has. In fact putting the two next to each other, the iPhone LCD screen looks better than the Renoir. TheLG’s touchscreen sits behind a plastic layer, compared withe glass-like feel of the iPhone screen.

That said the phone’s touchscreen seems to be a lot more responsive than the Viewty but not as much as the iPhone. But it is simple to use and the actual shortcut keys means it is pretty simply to open up applications on the phone fast.

One thing where the Renoir tries to be different is widgets. These little icons can be dragged onto the screen and give you speedy access to applets such as world time, notepads and messaging. Something similar can be found on the Google Android G1 phone.

{mospagebreak}With the phone sporting an 8-megapixel camera on the back. It is not difficult to spot it, it rather stands proud of the surface of the phone, somewhat ruining the aesthetic. But it does have a lens cover so at least it has kind of protection.

What pictures we could take were reasonably sharp in broad daylight and indoors. The camera features face detection, blink detection and smile detection, where the camera will only take shots when the subject is smiling.

There is room for adjusting the exposure up to ISO 1600. But in low light conditions, we found that pictures weren’t as good as we hoped. And considering that it sports a Xenon flash, this should have been better.

Taking a picture should be simply – open the lens cover and press the shutter button located on the side of the phone. However, with our review phone, the shutter button had somehow broken making the taking of shots difficult and sometimes impossible.

The phone also shoots video up to 120 fps, which means that slow motion video can be achieved with the phone.

The phone has a slot of microSDHC cards of up to 8GB in size and can play back Divx and Xvid files. Vidoe playback of files was good and reasonably enough to playback a film on long flights.

The phone also can playback music. The mobile sports some technology from Dolby which improves the sound of music files. But we noted the lack of a proper stereo jack for inserting normal headphones. Unless you go out and buy an adaptor you are lumped withLG’s own earphones.

The Renoir also features HSDPA for mobile internet usage. There is also GPS, which alongside Google Maps can be used to geo-tag photos. It also has a jogging app so you can see how far you have run.

Phone call quality is clear and makes poor network connections sound good. Texting using the touchscreen is not too bad either. You can use it in normal predictive keypad mode or flip it onto its side to use a full-sized qwerty keyboard.

The battery is rated at 350 hours standby and 220 minutes talktime.

Overall, the phone is a reasonably good attempt at at a touchscreen mobile. The screen may not be up there with the iphone 3G lcd screen but if that can be addressed this could give serious competition to the iPhone and Google’s Android.