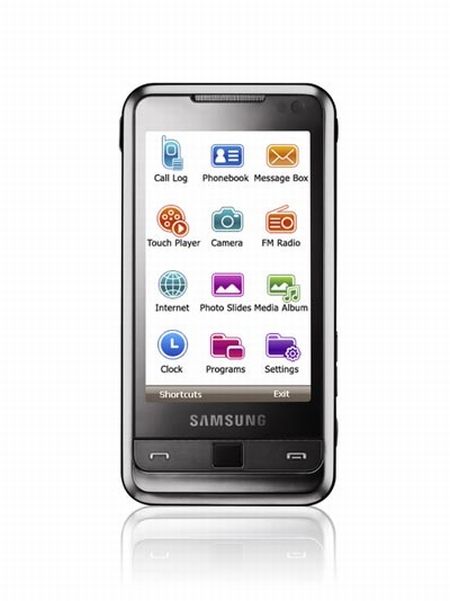 We’ve seen loads of touchscreen mobile phones here at Gadget Towers following the huge success of the Apple iPhone (and a few before that). While many feature distinctive and attractive designs, nothing has been able to touch the Apple for usability.

Enter the Samsung Omnia. In a bid to beat the iPhone at its own game, it looks suspiciously similar to its rival. You’ll find lines, curves and dimensions borrowed almost exclusively from the Steve Jobs School Of Design.

Like the iPhone, the Omnia feels impressively well-built in the hand. It can’t match the solid, metal casing of the original iPhone, but it’s not far behind the cheaper iPhone 3G.

The 3.2-inch display features an unusual resolution of 240 x 400 pixels. It’s definitely not the sharpest screen we’ve seen, but it’s good enough for most uses. The Omnia really comes into its own as a media player, however, standing head and shoulders above most Windows Mobile devices.

Video playback is stunning, with bright and vivid colours. Native support for DivX and other codecs means you’ll be able to swap your favourite films and TV programmes without spending several hours changing the format beforehand.

Our review unit came with 8GB of flash memory, with a 16GB model also available. The Omnia gains points against most similarly specced rivals thanks to its ability to add further storage space, with a microSD card reader in place.

Samsung offers a variety of onscreen keyboards for the Omnia, and none of them are very good. At least, we struggled with them. One of the most annoying features, despite the phone offering haptic feedback when menu buttons are pressed, is that it’s not even an option when you need it most – when hammering out a text message or email.

The keyboards include a traditional teeny-tiny Windows Mobile option, for the diminutive of finger, and more usable choices such as a QWERTY board that spans the width of the display. Trouble is, the display ain’t that wide, and it’s all too easy to hit the wrong key. Even in landscape orientation, we found the display unresponsive, and the phone unwilling to correct our ham-fisted attempts as an iPhone would.

The best compromise is a setup more akin to a traditional phone, with several letters to a button, and predictive text. Once again, the lack of feedback makes it difficult to know if your actions have registered, slowing down typing to ensure they have.

If might seem unfair on the Omnia to spend several paragraphs moaning about one aspect, but it’s testament to just how important the interface actually is. Even if the display was slightly more responsive, had haptic feedback when you’re actually writing, or better software to correct typing mistakes on the go, it would make a huge difference to our low opinion of what this phone does offer.

You’ll find Windows Mobile 6.1 in place. Like HTC with its TouchFLO software, Samsung has tried to make navigating the OS easier by implementing its own software. The menu looks great – with a feature called Samsung Widgets that lets you drag and drop applications onto the desktop from a scrollable menu bar on the left of the display.

The limitations come when you try to add more applications to the menu bar, where you’ll find you can only use the pre-selected choices. Until more are added, you’re likely to find the applications you want to use omitted, especially considering it doesn’t work alongside the Windows Today screen.

As with TouchFlo, the more you delve into menus, the quicker you’ll be dumped back into the world of Windows Mobile, with fiddly options that require a stylus or elf-like fingers. The lack of consistency is also frustrating, with different styles of menus in place depending on what you’re doing. That said, the speedy 624MHz processor at least makes navigating the OS a rapid experience, with applications opening without lag.

Opera’s internet browser is bundled as standard, and searching the net on this handheld is definitely a better experience than on smaller rivals. Zooming is achieved by tapping the display and scrolling top to bottom. We found it worked well most of the time, but it does make it easy to zoom by accident when you’re simply trying to navigate the page.

Connectivity is faultless, with 3G, HSDPA, aGPS and GPS all built in, and enough acronyms to confuse even the most tech-savvy of consumer. With Google Maps also pre-installed, the Omnia makes a handy satellite navigation device when you’re out and about, picking up a signal in a minimum amount of time thanks to the network assistance.

The camera is also a major plus-point on this phone, with a 5-megapixel sensor. You’ll still find digital noise at low light levels, but image quality proved great when out and about during daylight. The removable memory card also comes in handy, as you’ll be able to instantly move images to your laptop.

Oh yeah, “and use as a phone?” we hear you cry. It’s fine. No better, no worse than average. Call quality proved good, with a strong signal held throughout. Once again, the lack of easy text input proves annoying when sending text messages, but it’s fine for tapping in numbers. The Omnia is available from free with a £25-per-month Orange contract (200 mins & unlimited texts a month) at the Carphone Warehouse.

Overall, the Omnia proved the biggest of marmite phones. Even those of us at Absolute Gadget who loved it, also hated it at times, and the dissenters struggled to hold off praise when it came to the on-paper specification or impressive camera.

There’s no ignoring the flawed interface, and the inconsistent menus make using it as a phone less than intuitive. However, since this is such a love-it-or-hate-it device, we recommend having a play with one in a shop and seeing if you can get to grips with it – as if you can overcome the flaws there are some really good points. As a media player, it comes into a world of its own (a bit like the Samsung i8510 Innov8) – with good file support, a widescreen display and removable SD cards, and if you don’t mind the interface then it has to be worth a look.