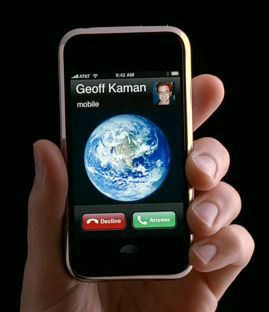 As a website dedicated to cool and shiny things, nothing in the past year has screamed out to be reviewed more than Apple’s massively hyped iPhone…

Other touchscreen phones have split opinion in the Absolute Gadget offices, to a degree that makes drunken football fanatics look like the best of mates. Half of us abhor them, while our beloved editor is willing to trample over his own mother in order to hang onto the HTC Touch [Sorry mum – Ed].

The iPhone promises to be different, however, as its large 3.5-inch display offers an intelligent onscreen keypad that can be used with your fingers rather than a stylus, and a unique multi-touch user interface.

The menu is logically laid out, with a single hardware button on the bottom of the iPhone to return to the home page. Zooming on photos, web pages or documents is done with your finger and thumb – pinching them together zooms out, and pushing them away from each other zooms in. Add to this a scroll function operated by a simple swipe of a digit, and it really couldn’t be easier or quicker to navigate.

That you don’t have to press a button to rotate the screen between landscape and portrait mode is also impressive – simply turn the iPhone onto its side and the screen rotates automatically, which is great when you’re using it as a camera. To this end, there’s a 2-megapixel sensor built-in, with a tiny lens on the rear of the phone. Photo quality was good, although there’s a big delay between pressing the button and anything happening.

The screen dominates the front of the iPhone, and is the reason for its squat appearance. Whatever your opinion of the phone, there can be no arguments about the quality of the display. Colours appear true to life, and the crisp 480 x 320 pixel resolution is ideal for browsing the web.

Where most mobile devices resort to software such as Opera to resize pages, you’ll be able to view sites in their entirety on the iPhone, albeit without support for Flash. We also liked the Safari web-browser’s ability to open separate tabs, allowing you to open more than one webpage simultaneously.

The screen also takes full advantage of the built-in Google Maps application. There’s no GPS receiver, but it’s easy to type in your location and there’s enough space to view the surrounding areas. Better yet, Google Earth is also included. It’s not as useful, but the incredibly detailed satellite images are cool none-the-less.

The iPhone’s cutting-edge OS is one of the few truly innovative features on the device – although a lack of 3G restricts download and web-browsing speeds. We found this especially noticeable when using the integrated YouTube application, where videos could take quite a while to buffer. Thankfully, you’ll also find Wi-Fi built-in, and the O2 contract includes free connections to Cloud hotspots throughout the country.

The iPhone’s interface is ideal for use as a music player, the touchscreen making it easy to flick through your collection and view album covers. However, Apple has fitted a recessed headphone jack – so you’ll either have to pay yet more money for an adapter or use the rubbish headphones supplied. If you do buy the iPhone, the former option is a must. The tinny standard headphones are certain to drive anyone within 10 feet of you insane, with very little of the music actually being directed into your ears.

Although the cynical attempt to make us spend more money on a headphone adapter is annoying, the iPhone has a much bigger flaw that puts us off abandoning our regular phones and music players. We found ourselves charging the battery pretty much every day under moderate use, and when watching movies or listening to music this could drop to a couple of hours. Although this is acceptable for a regular media player, it’s downright annoying when it’s your phone.

No problems though – just pop in another battery, right? Annoyingly, no. The iPhone is a sealed unit, so you won’t be able to keep a back-up battery for those moments when you really need to make a call. There are also other areas that betray the fact this is a first-generation product. Although we liked the threaded messaging – which allows you to view entire conversations – it’s only possible to send a message to one person at a time.

There’s also no support for MMS (Multi Media Messaging) and, if you want to send photos or other files to friends, the only way is by email. Other foibles include a lack of access to contact details stored on SIM cards – making it near-impossible for the average user to transfer their phone book to the iPhone. The integrated Bluetooth adapter is particularly picky over what it will talk to, with no support for phone-to-phone connections. This rules out the ability to share files wirelessly.

One area where it’s difficult to criticise the iPhone is build quality. The company claims the glass display is scratch proof, and in the time we had it the iPhone did indeed appear indifferent to our clumsy handling, escaping without any sign of scuffs or wear. The rear of the phone is constructed from aluminium, adding to the tactile feel. At the bottom, you’ll find a black plastic strip, covering the antennas for the Wi-Fi and Bluetooth adapters.

The one thing we haven’t mentioned, and it’s a big issue for most people, is price. The iPhone currently costs £269 on top of a £35, 18 month contract. It includes free data rates, and connections to any of O2’s Cloud wireless hotspots, so the contract alone may save some heavy data users money. Unfortunately, for most consumers, the overall cost and lack of operator choice will be the final nail in the iPhone’s coffin.

Overall, a damn good first effort on Apple’s part, with a thoroughly usable interface. It does have some annoying foibles and missing features, but they will hopefully be rectified with the next version.