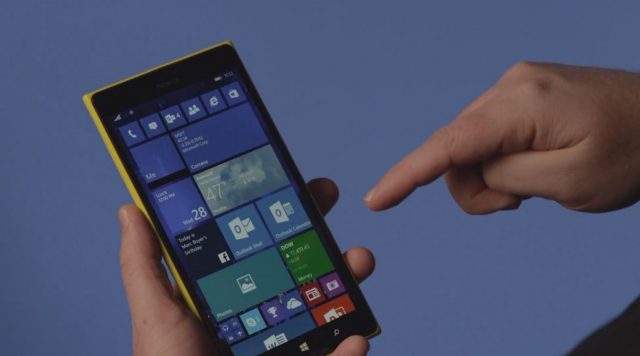 The jump from Windows Phone 8 to Windows 10 for phones is a giant leap of sorts. It marks the first time that full fat Windows will run from smartphones and tablets right up to laptops, desktops and servers.

In practice, this will see Microsoft tailoring the OS for screen sizes eight inches and smaller that is different from that for bigger displays, but will still be the same codebase.

“Windows 10 represents the first step of a whole new generation of Windows, unlocking new experiences to give customers new ways to work, play and connect,” said Terry Myerson, executive vice president of the Operating Systems group at Microsoft. “This will be our most comprehensive operating system and the best release Microsoft has ever done for our business customers, and we look forward to working together with our broader Windows community to bring Windows 10 to life in the months ahead.”

We will look at the UK release date, price and new features in more detail.

At the WinHEC conference in Shenzhen, Microsoft said Windows 10 for phones would be released “this summer” in 190 countries and 111 languages.

“Partition Stitching” will allow the OS to be installed on a number of other Windows phones at the next update.

Users in the so-called “fast ring” can download the new Windows 10 for Phones Preview (build 10051) now. This includes the Project Spartan browser as well as new apps such as mail, calendar, phone, messaging, people, maps.

When launched the OS will be a free upgrade for existing Windows devices, including those running Windows Phone 8.1. It is not known how much Microsoft will charge for upgrading after that.

The big thing touted about Windows 10 is unity. In effect, any software developed to run on the desktop version of Windows 10 will also run on a tablet or phone without any trouble.

Users will also be able to open and edit Microsoft Office documents on any Windows 10 device and files will sync in the cloud.

Live tiles will look similar in Windows 10 for phones but not quite identical. Background images can be seen through the translucent tiles and the Start screen can be customised by changing colours.

Apps list can be bought up by swiping to the right and recently installed apps will show at the top.

The settings screen now looks a lot more like the desktop and tablet version of the OS. Quick settings has a wider range than previously as well as a different colur scheme.

The keyboard can now be resized and moved around the screen to fit your fingers. There is also a precision pointing stick, similar to the renowned red nub on Lenovo keyboards. The virtual pointer has one task: let you steer with ease and precision on the display.

Windows 10 for phone sports a new photo app that aggregate all pictures and remove duplicates or multiple images from burst mode shots, automatically makes albums and improves photos. Lumia Camera will become the default app on all Windows 10 phones, moving out of the Lumia phone ghetto.

Microsoft’s new browser finally has a proper name: Microsoft Edge. This new browser is a universal app that will work across devices and uses the same rendering engine whatever it runs on.

It sports a special reading list view, which saves articles to read later. The simple layout comes with dark and light options and can change font size.

However, the new browser won’t sport all the bells an whistle seen on the desktop version of the app.

“An early version of Project Spartan is available in this flight. It uses our new rendering engine to give greater interoperability with the modern mobile web, and includes early versions of Reading View and Reading List. For now, Project Spartan is not the default browser, and exists side-by-side with IE11. You can find it in the All Apps list and pin it to your Start Screen from there,” Microsoft’s Gabe Aul wrote in a blog post.

The new universal People app has a new visual design but will continue to be the comprehensive list of all your contacts across the services you care about such as Exchange, Outlook.com, Gmail, Facebook, etc. You’ll be able to easily manage all your contacts and quickly connect with them.

Microsoft also announced the arrival of its Continuum feature at its Build conference. The feature turns a smartphone into a fully function computer. The OS adapt its interface depending on the context you’re using it.

During an on-stage demo, Microsoft’s Joe Belfiore connected a phone to a monitor, keyboard and mouse, and instantly the UI adapted to the new inputs and outputs.