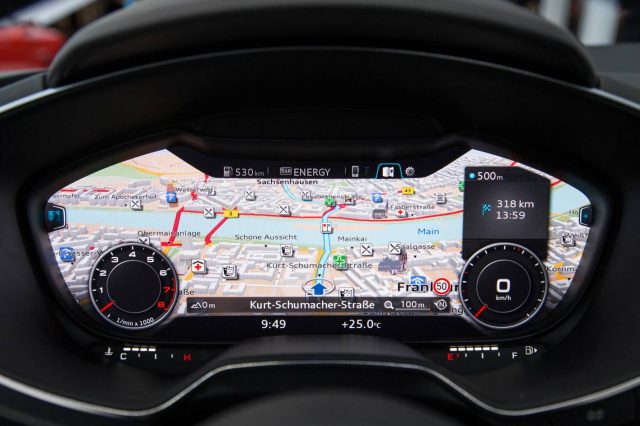 The third generation Audi TT has been given an update that will make it appeal to smartphone users.

The latest version of the sports car now comes with a Virtual Cockpit, pitting it against the likes of Apple’s CarPlay as well as Google’s Open Automotive Alliance and the Connected Car Consortium’s MirrorLink.

While the original car took just four weeks to design in 1995, the latest one with loads more tech under the hood, took around five years.

This cockpit does away with needles, gauges and dials in the analogue sense and instead displays virtually all information on a high-definition LCD screen. The screen can also be customised to show information relevant to the driver.

The 12.3-inch 1,440 by 550 pixel display boasts a refresh rate of 60fps, so the driver doesn’t notice any flickering. Two modes are available. The first is the classic dashboard with a rev counter on one side and a speedo on the other. Perched between these is a small multimedia display with maps, songs, etc.

The other mode sees the dials decrease in size with the mapping or media coming to the fore.

The virtual cockpit is compatible with Google and Apple apps, along with common entertainment services like Pandora, etc.

The system is controlled either using a new wheel-mounted control panel or the traditional multimedia interface below the gear stick. With MMI touch, the driver can zoom-in and scroll lists and on maps.

On the outside there have been a number of refinements to the car.

This new Audi TT will go on sale later in the year. Prices have yet to be confirmed.