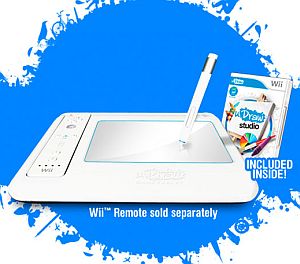 Back in the day we used to try and convince our parents that all those hours of gaming were a necessary part of our development. “But mum, I need to work on my hand-eye coordination!” we’d shout as she forced us outside to play football and breathe fresh air. So we’re just going to stare in envy at a Wii Accessory that “blends family fun and artistic expression”.

The uDraw GameTablet offers a 4×6-inch drawing space and pressure-sensitive stylus in a bid to provide “more subtle control and precision” than the traditional Wii Remote.

“With the uDraw GameTablet, the television becomes a virtual canvas for everyone from doodlers to accomplished artists, letting them create original artwork, enjoy drawing-based games, such as Pictionary – and even save their artistic creations on an SD memory card,” said developer THQ.

The uDraw GameTablet can also use tilt-and-roll movements to control in-game characters by moving and directing them through game levels.

That’s because the Wiimote docks within the uDraw GameTablet, allowing the device to draw power from it – a storage area then hides the Wii Remote wrist strap and stylus when not in use.

The uDraw GameTablet is available now at retailers across North America and has a suggested retail price of $69.99. It comes bundled with uDraw Studio, a “feature-rich” drawing, coloring and art-based video game.

It is expected to launch in Europe and other international territories beginning early next year.

In addition, THQ is releasing two videogames designed especially for use with the uDraw GameTablet. Dood’s Big Adventure is a drawing-inspired side-scrolling adventure, while Pictionary comes to videogame consoles for the first time in more than two decades.