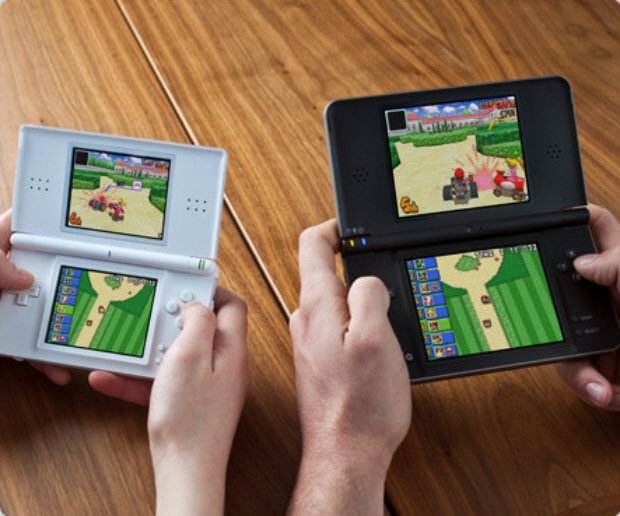 For many the Nintendo DS is a great handheld. For parents, it is one of the cheapest babysitters there is. But can it make the leap from being the children’s favourite to something that will appear to the older gamer?

Over the past few months the previous consoles have seen more an more games appear that would appeal more to grown-ups than the little ones. We have seen plenty here at Absolute Gadget, ranging from Professor Layton to being able to read Jane Austen and the greats of literature. Nintendogs, these ain’t!

One of the things that the new XL can promise is a bigger screen. While Nintendo DS games have been content to play on the small displays that have grace DS’s past, if you want some thine that could be used as an eBook reader, the larger display is a must. The XL promises a 93 per cent bigger screen than previous models. But those who have already bought a console will be asking themselves “do I need a new DS and is this any better than the one I have already?”

Since its launch at the E3 show back in June 2004, the console has had more facelifts than Joan Rivers. The “phat” version was followed by the DS Lite in 2006, sporting a glossy white casing and slim form factor. Afterwards came the DSi last year and was thinner still and sported a larger screen, an SD card slot (in the process ditching the cartridge support for GBA), two camera and AAC media playback.

This version of the console sees it getting colourful. No more the Apple-inspired looks of the DS Lite. This console comes in wine red or dark brown. Both colours chosen to appeal to the older gamer who may not always appreciate a console in shocking pink or radioactive green.

The console has a matte underneath so will sit nicely at the table like a well-behaved child bribed with sweeties at their nan’s house.

As another sop to the older gamer, it comes pre-loaded with “A Little Bit of… Dr Kawashima’s Brain Training: Arts Edition” and Dictionary 6-in-1 with Camera Function. It also features the DSi Browser, which makes an impressive stab at rendering full web pages on a screen barely bigger than an iPhone. And while admittedly it won’t be on a par with the iPhone for browsing, it is by far the best effort by any handheld (are you listening Sony?). Although, linking up to a wireless connection is a slight pain but doable.

Another surprising feature is the stylus. Instead of the thin sticks we are so used to with previous incarnations and PDAs, this has more of a feel of a proper pen.

But the main feature and arguably the most important is the screen. At 4.2 inches, it certainly makes for a better gaming experience than the previous 3.25 effort of the DSi. Playing the same game on the XL and the DSi doesn’t really compare. Going back to a previous console is certainly a step backwards in our estimation. Once you’ve gone XL, you don’t go back.

Having a larger screen, not only takes the strain off your eyes, it makes judging jumping and distances a lot easier. Heck, with found Super Mario a darn sight easier to play. But the resolution stays firmly the same, which make make some games look slightly blockier than before.

This is more than made up for by the sound. It has got better than the last console. But you may not make many friends on the train to work.

Overall, if you have never had a DS before, than £160 is a lot to spend on what is essentially the same console with a bigger screen and better sound. That said, if you like to upgrade to the latest and greatest, then these mere considerations won’t stop you at all.

Where this should appeal most to (and you have probably guessed what we are going to say) is the older gamer and one whose hands don’t resemble those of a small child or pixie.

Yes, it is not really something that can slip into a trouser pocket, but they never were. This is one to put in the handbag (or if you are a guy, get into 2010 and buy a manbag – you won’t regret it).

Let’s just say, this does everything apart from make a phone call. A handheld for grown-up with normal-sized hands.