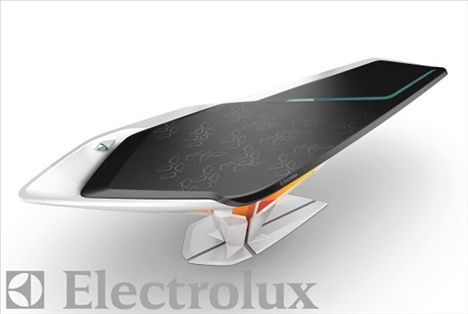 Not because in the future we’ll all be flying in jet cars and eating lunch pills, but Electrolux reckons kitchens won’t need pots and pans.

In its “Heart of the Home” concept kitchen, the company has gotten rid of the need for kitchen equipment with an intelligent surface that moulds around food you want to cook and it will also analyse that food and present you with suitable recipes. Of course, in the Absolute Gadget office, we only eat foie gras and champagne, so it’ll be interesting to see what it would come up with.

The mallable surface can be shaped to any depth so you can fry or boil. Not sure how it will steam broccoli though!

Electrolux came up with the concept to meet the demands on sapec, energy and the environment” as it reckons that by 2050, 75 per cent of the population will be living in urban areas. Presumably not unlike some bad dystopian novel where everyone has numbers instead of names and wears the same form-fitting uniform as everyone else.

We digress, the company said the design, unveiled last week at DesignBoost in Sweden, was created for “the person driven by culinary curiousity using new technology without removing the essence of cooking”.

Whether or not it can cook Soylent Green is another matter.