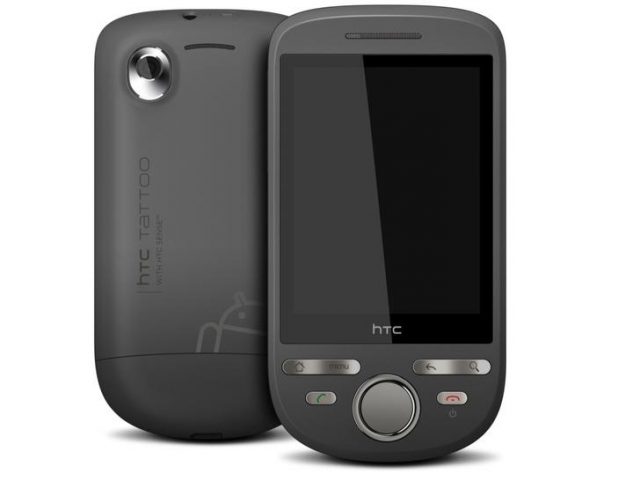 HTC has certainly done more than other phone manufacturers to back the Android OS, but will its Tattoo take the Google smartphone OS to the masses.

Over the past few years, HTC has unleashed a barrage of Android devices, such as the G1, Hero and Magic. And while the Android brings a certain panache to the mobile arena, that panache costs in terms of pricing and lengthy tariff contracts.

To remedy this, The Tattoo was born. It is firmly aimed at the budget end of the market for those who want the Android but not the hefty bill.

It itself bears more of a relation to the HTC Hero phone than its other Android brethren. It sports the Sense UI (also seen on the Hero) and instead of the Android analogue clock, there is the HTC digital clock and weather where you are.

But the Tattoo has one up on most other Android phones in that it boasts version 1.6 of the OS. While the software is snazzed-up the outside isn’t as great looking as the Hero. While it is compact, it feels chunkier than the Hero and rather dowdy. It also has an ordinary four-way nav button instead of a trackball (although this isn’t such a bad thing really as trackballs are notorious for getting clogged up with dirt and stopping working – ask anyone that has an Apple Mighty Mouse).

There are seven buttons on the front with the navigation button being the biggest. And if you want to wake it from its slumber don’t press the big button, you have to press the menu button instead (because that makes sense!!!). Thankfully, shutting things down means pressing the power button.

If the lacklustre body fails to appeal, then that can be remedied with a new case. These can be bought separately and most surely will jazz up your phone. Both the front and back can be changed.

The Tattoo features a 3.2-megapixel camera and it really sticks out, literally, from the case. Elsewhere, there is a 3.5mm headphone jack for plugging in your own favourite sets of cans. and a micro USB connector to charge up from or connect to your computer. There is also a volume control at the side.

But the most impressive part of the phone is the interface. the Sense UI is really a big plus in favour of the phone. Like the Hero, it takes the Android interface and gives it a massive makeover. You will hardly believe that it is the same underlying software. Of course, instead of Google’s widgets, HTC has bundled a few of its own to customise the interface. Of course, you can go ahead and stick Google widgets on yourself if necessary.

The weather is a nice touch, but as the phone uses A-GPS instead of the full ticket, the location can be somewhat inaccurate.

Underneath this lies the Message, Mail, Browser and Camera icons. The screen itself uses a resistive  2.8-inch QVGA screen, in marked contrast to the HTC Hero’s capacitive 3.2-inch HVGA screen. Here is where corners are cut to make a price point. This means that responsiveness is not up there with the hero. The price means that media playback is not as good as the Hero either.

The look of the interface can also be changed with a feature called Scenes. Something taken out of the Hero playbook, Scenes re-skins the interface and puts different widgets depending which one is chosen. There are several to choose from including, HTC, Social, Work, Play, Travel and Clean Slate.

You can also change the wallpaper and add other widgets to your home screen. With each of these Scenes are several home screens and you can use the big button to move from one to another.

There is a screen for a mailbox to the left of the main home screen. All widgets can be customised and those which aren’t wanted can be held down with the main button and taken to the trash.

Another flick leftwards brings you to text messages and one more brings up the weather in several places in the world.

To the right of the main screen are displays for favourite phone numbers, bookmarks and a blank screen to customise yourself. This means that applications can be grouped together in order and you can always return to the main screen by clicking on the menu button.

That said, when the phone pulls information from the web there is a time delay with some apps taking much longer than others.

On each screen there is always three buttons. On the left is the button that brings up all the programs contained on the phone. The middle (biggest) button is where you make phone calls (remember them) and on the right is a “+” button.

Making calls via the phone button brings up contacts from you address book. Start typing a number and the phone will sort through your contacts to find the contact you are trying to dial. This should cut down on time. Otherwise pressing the grid button on the left brings up the contact list for you to peruse manually. Clicking on a contact dials that number immediately. Call quality is sharp and clear and from our end we could be heard easily.

Messaging is also quite good but you will need to get yourself used to tapping on the screen to write out a message. This is best done by tilting the phone onto its side and waiting for the phone to go into landscape mode. Typing can be a pain at first, but with a little effort, you can get used to typing reasonably fast (although with this small screen, it is still quite slow as you do have to correct words even when proficient).

There is predictive text (like the Hero) and it would be good to turn it off sometimes as it likes to predict a word and then stick with it even if that was not the word you wanted to type. Also, a resistive screen also makes it difficult to type into the message or email – a little too much cost cutting makes this a less than brilliant experience.

Browsing the internet is a lot better experience. Surfing the web is a straightforward affair. Click on the internet widget and away you go.

If you find a website you like (such as www.absolutegadget.com) then you can easily bookmark it. With the resistive screen you cannot pinch and zoom like you can with a capacitive screen. Instead you have to use the zoom button at the bottom of the screen, which takes up valuable screen real estate on an already small display.

Browser on the device will always bring you to the mobile version of that website. You have to delve deeper into settings to bring up normal versions of websites.

The camera and video of the phone are good, considering the price and the test pictures we made looked good even if background detail was a little hazy to our eyes. Videos and pictures can be uploaded to the relevant sites.

The music player is simple to use and it is a matter of dragging the appropriate files onto the phone’s memory. the app uses a cover-flow type interface, much like the iPhone or iPod. Sound quality is good with good bass response and clear treble output. There is also an FM player which manages to pick up local radio signals very well.

The battery life is OK. HTC quotes 350 minutes talk time, but in tests, when you use the internet functions and other multimedia apps, the battery dies after a day and a half (but this is better than most smartphones).

As with all Android phones, there is the Android Store, where you can get new apps (paid and free) downloaded to your phone.

Overall, this is a great phone if you haven’t got the money to buy an iPhone or Blackberry. However, you have to weigh up the cost-cutting measures employed to get this to an attractive price point in order to judge if it is still worth getting this now or saving up for a bigger phone. But if you can get a good deal on a tariff and get the phone for free, it may be just the thing to get you onto the smartphone scene.