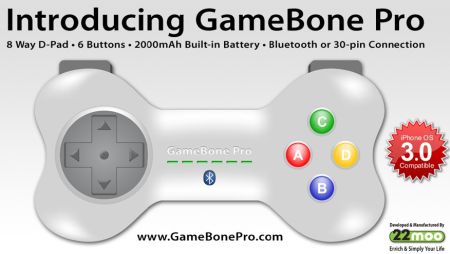 Like playing games on your iPhone, but don’t care for the touchscreen controls? Australian company 22Moo has got your back with a new controller peripheral. Which is shaped like a bone, for some reason.

The GameBone Pro controller takes its cue from the classic SNES set-up of D-pad, four face buttons and two shoulder buttons. It’s got a 200Ah lithium-ion battery to give your phone a power top-up should it need it, and a built-in microphone and speakers.

The downside is that it doesn’t clip directly onto the handset, instead connecting either via Bluetooth or a dock cable, meaning you’re going to have to prop up your phone to use the controller.

22Moo is planning to ship its baby with a combination vertical/horizontal stand for the iPhone, essentially turning it into a tiny, tiny television.

Plus, of course, developers will have to specifically add support for the GameBone to their apps, so your games might not support it.

The GameBone is planned to ship in September. 22Moo hasn’t actually decided on a price yet, and is asking visitors to its website to suggest one, helping them to work out a good selling rate.

Maybe it could be the first of a number of similar peripherals that’ll eventually convince Apple to make an official controller. Who knows?  (Well, Doctor Who probably does, what with the time-travel, but David Tennant’s agent isn’t returning our calls.)