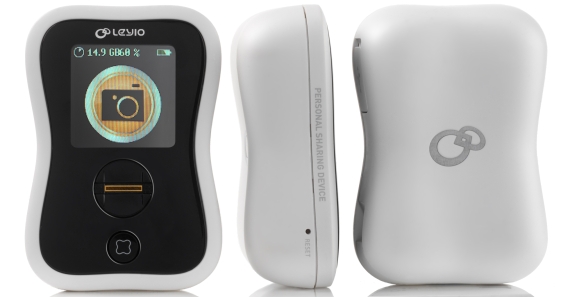 The marketing is annoying but the device has a few interesting
gimmicks, if your the type of person that likes to transfer files at
the flick of a wrist. The world’s first wireless hard drive from Leyio
could just be a solution in search of a problem.

The Leyio UWB (Ultra-Wideband) storage device uses a new(-ish)
technology to transfer files over the airwaves much more faster than
Bluetooth or even common-or-garden wireless networks. It can transfer
data at a whopping 10Mbps, four times faster than Wi-Fi and 100 times
quicker than Bluetooth. The downside is that at present, most of the
other people you can transfer files to are other Leyio users.

That said, it comes with 16GB of storage space. How do you fill this
storage up, we hear you ask. Well for a start, you can have another
Leyio user flick data over to you (courtesy of an accelerometer). Of
course, other Leyio users are thin on the ground at the time of
writing, so you would transfer stuff from your PC onto the device.

How would I do that I haven’t got UWB on my laptop and mobile phone?
Ah, there’s the rub. Not many lappies sport this data transfer
technology (same was true for Bluetooth many moons ago) so you have to
rely on the device’s detachable 2GB USB flash drive to transfer stuff
over from the PC to the Leyio. You can also plug in other USB drives
into the device’s port if you so wish.

It also comes with a fingerprint scanner for extra security and the
integrated USB drive wipes any data on the stick for extra safety.

At present the lack of other devices feature UWB rather stymies the
device’s appeal. Add to that the lack of extra functionality of the
device (i.e. no audio player as there is no 3.5mm headphone jack and a
screen too small to watch videos on) and it is sadly a one-trick pony.
While UWB may have a future in front of it, it is hard to see where
this device is going, especially when you can get a normal 16GB USB
stick for far less money.