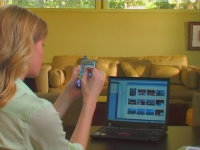 A new version of Bluetooth technology has been introduced that is faster and provides increased throughput of data transfer. Speak English, man! OK, it means you can now transfer large amounts of video, music and photos between devices wirelessly at high speeds.

"This latest iteration of the popular short-range wireless technology fulfills the consumers’ need for speed while providing the same wireless Bluetooth experience – faster," said a statement from the SIG.

"Manufacturers of consumer electronics and home entertainment devices can now build their products to send large amounts of video, music and photos between devices wirelessly at speeds consumers expect."

The 802.11 radio protocol, which is now included within Bluetooth HS, transfers data at the approximate rate of 24 Mbps.

The SIG said that mobile devices using the new standard would also realise "increased power savings due to enhanced power control built in".

The Bluetooth SIG’s formal adoption of the specification is only the first step in the product lifecycle.

The second step has begun thanks to wireless chip manufacturers such as Atheros, Broadcom and CSR, who are already starting to get silicon products to device manufacturers.

End products for consumers are expected to be in the market in 9 to 12 months.