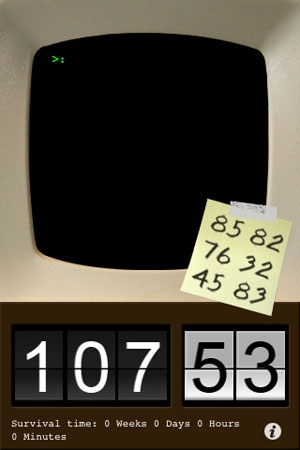 Remember the computer terminal in Lost Series 2? Well now you can relive the urgency of pushing the button every 108 minutes thanks to the iPhone game Doomsday Terminal. And you could win a $200 gift certificate if you’re the first to survive one week’s gameplay.

"SmallRock Software has officially apologised for all the hours of lost sleep experienced by the users of its new game, Doomsday Terminal," said the developers.

"As an act of contrition SmallRock Software has announced that the first Doomsday Terminal user to survive for a week will receive a $200 (USD) gift card of their choice."

The deceptively simple Doomsday Terminal is all about trying to survive longer than your competitors across the globe.

Survival times are automatically synced with the server and players can communicate via the built-in terminal.

“Within the first day of use, competitors quickly find themselves re-arranging their lives around the simple act of typing a number,” the suits at Smallrock said.

Doomsday Terminal features:
* The clock is always running; Every time you open the program it knows how much time has passed
* Two-tiered warning sound effects; live and die by them
* Send and receive anonymous messages via the terminal
* Watch survival times online to see who the real hero is
* Discover other commands via the command line
* Supported Languages:  US English
* Supported Devices:  All iPhone and iPod Touch devices with iPhone OS 2.2 or above.

Doomsday Terminal 1.0 is available for $0.99 through Apple’s App Store.