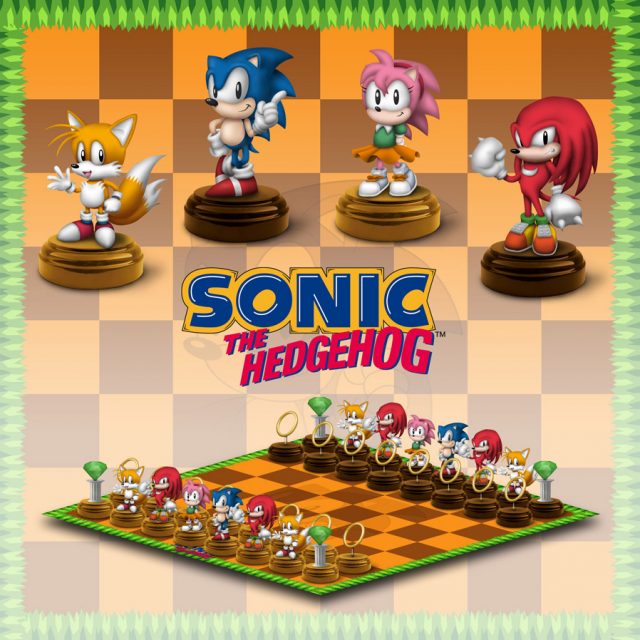 We’re used to things
that fall into the "ridiculous-yet-cool-videogame-tat" category to hail
from Japan, or perhaps the U.S. So it’s nice to see that Europe can, on
occasion, make with the gaming goodness – as in this very nifty
German-made Sonic the Hedgehog chess set.

The set’s the work
of Gaya Entertainment, who proclaim "coolen Classic Sonic Design", and
we’re inclined to agree. The plastic pieces, between 5 and 7cm tall,
feature Sonic himself as the king, girly-hedgehog Amy as the queen,
perennial sidekick Tails as the knight and "Sonic character that looks
least like the animal he’s based on" Knuckles the Echidna as the
bishop.

One of those tempting jewels known as Chaos Emeralds is pressed
into service as a rook, and the eternally shiny golden rings make up
the pawns. Seems a bit of a shame that both sides are the same – if it
were us we’d make one of the teams in the image of dastardly Dr.
Robotnik and his robot army – but hey.

Also, if we were
massive Sonic nerds, we’d commend Gaya for using the original character
models instead of the new ones, as it gives that extra bit of delicious
retro hit. But, um, we’re not. Honest.

The set should be out by February or March, at the cost of around £35.