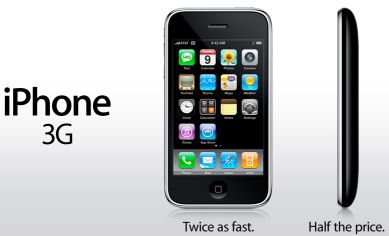 It was the world’s worst kept secret but now at last, the specs for the latest iteration of the iPhone can now be shown to an eager world.

The new version should be available to Brits sometime around 11 July
and with any luck should only cost £100 for the 8GB version (which
should ensure that the phones fly out of the shops). But what we do
know so far is that the device will be available in the U.S. for $199
(or $299 for the 16GB version).

Speaking at Apple’s worldwide developer’s conference in San Francisco,
Steve Jobs said the "number one reason people didn’t buy the iPhone was
that they couldn’t afford it, so we need to make the iPhone more
affordable." So now it will be subsidised by the operators, like any
other phone.

The new iPhone is also slimmer (weighing in at a size-zero 133G)than
the original and thanks to its 3G capabilities, is it claimed to be
twice as fast.

It will also come with full GPS functionality, so you can never get
lost again. Also on table is full push email with Microsoft Outlook
servers.

While the original iPhone took its design cue from the iPod, it has had
to ditch the metal backing in favour of black plastic to improve on the
poor reception the original suffered. (The 16GB version has a white
casing option).

According to some rumours, Apple is set to turn the iPhone into a
handheld games console with games such as Sega’s Super Monkey Ball and
Kroll touted to be launched in the next few weeks.

See our review of the original iPhone here.