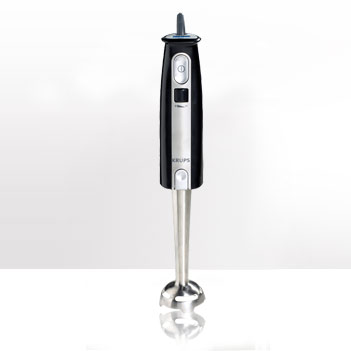 OK, so
it’s not a major philosophical debate but the question is often asked
"why bother with a hand blender when a normal food processor is just as
good?" After using Krups latest GPA 3 hand blender we now beg to differ
on the point as our humble food processor has taken up permanent
residence in the kitchen cupboard, and a tad unloved.

This hand blender, it has to be said, should win an award for looking
so stylish. Its black and silver design must have been created to
coordinate with many an upmarket modern kitchen’s granite worktop. We would
normally hide most of our kitchen equipment away in cupboards until
needed, but this hand blender does spend a lot of time sitting on the black
surface, complementing this room’s overall look.

But style is one thing, but does it have any substance? Well, it has an
illuminated display which tells you what speed it is going at. Now that
may seem odd when you should be able to tell from the sound of thing.
But that is just it, it is a lot quieter than must blenders. It deploys
"Silent Technology" – which basically means it is quiet in operation.

That aside, it does have six speeds, quite useful if you are blitzing
stuff or just turning ingredients over. To move up and down the speeds
is a case of running your finger over the little roller and it
instantly responds.

It has a multitude of different attachments, such as a multiwhisk, a
jug, a bowl, and blades to crush ice with. We gave it what we thought
would be an unfair test to see what it was capable of. Basically we
needed castor sugar for some cakes we were baking for the team meeting.
As we had normal sugar, we stuck that in and used the grinder to see if
we could make the sugar any finer. We wasn’t expecting it to do much,
but were pleasantly surprised when after a few minutes, we had the fine
suger we needed.

We were very impressed with it on a number of levels. Its good looks,
the grip which doesn’t kill your hand when using, the fact that it is
so quiet you barely think it’s doing anything until you look down and
it’s finished its task and its overall smooth operation. (This probably
down to its Krups Motor Technik, which is a new motor technology which
monitors and regulates the motor activity, ensuring a consistent
operating speed (rpm) whatever the load.)

Overall, there’s a lot to be said for hand blenders when they can be this good.

Easy to use progressive speed control dial- soft start technology
for a smooth start, just roll the dial to reach the speed required