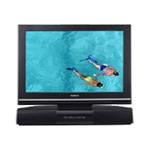 A small HD Ready TV that features a PVR and digital tuner could be just the thing for a room lacking space. Especially as it could also double as your stereo in a pinch…

Based on the packaging, the press release and the stickers running down the side of the screen itself, the Humax Amadeus sells itself on its sounds qualities. That’s down to two 8W speakers kicking out an impressive sound, which is free of distortion even at neighbour-baiting levels. Oddly, given that sound is its strongest point, the best options aren’t switched on as standard and you will need to have a fiddle with them to find the best choice for your space.

Thankfully, other TV functions are easy to set up, with automatic searches for channels the first time you use it. However, the PVR functions are conducted in an unusual way. Rather than come with an embedded hard drive to store programs, the TV has an external drive that plugs in using a USB lead. OK, the designers have crafted this so it’s sleek and black (much more so than the TV itself, which looks bulky), but it still seems like an oddity sitting in front of your gogglebox. At least it has the added bonus of letting you plug it into your PC and fill it up with MP3 tunes, making good use of the speakers to blast these out. It’s just a shame that the manual tells you not to go connecting devices such as USB key drives to the TV’s USB port, as this would have been a very useful function.

In contrast to the hard-to-miss external hard drive, controls for the PVR are hidden away under a sliding panel. That means there are no accidental presses while you’re channel surfing the regular stations. All the usual options are here, including pausing live TV, recording and playback of programmes. These only work for the digital tuner, though, so there’s no stopping the action on analogue channels while you nip to the smallest room in the house.

The best hidden extras can also be found amid the covered remote control buttons. Pressing the G key opens up a menu of four games, including a block-moving puzzler (Egg Egg); an Othello clone (Battlesea); a timed construction puzzler (Rail Wiz); and a Bejewelled clone (Bug’s Opera). You won’t want to sit too far from the screen while playing some of these, as such behaviour is unlikely to impress the optician on your next visit. These games can also only be accessed when the drive is active, which means you’ll need to be watching a digital tuner channel.

As for the LCD screen, playback was crisp in action sequences, with a picture much better than expected from a 22-inch set. The amount of ‘noise’ – interference produced when the action moves quickly and pixels aren’t refreshed quick enough – was minimal, even in a frantic dragon chase scene from /Harry Potter And The Goblet Of Fire/. There was some distortion when it came to masses of blacks merging together, although this effect was only visible when sitting close to the screen and was much less noticeable from a regular viewing spot a few feet away.

One real annoyance was that the signal from a Virgin Media V+ box connected using HDMI was occasionally interrupted by a line across the middle of the image. No amount of settings changes on either bit of kit could rectify this. The same problem wasn’t replicated when connecting the V+ box to our regular Evesham HD Ready TV. Connecting the V+ box to the Humax TV using a Scart lead did manage to solve this problem, removing the annoying line but dropping us into low res. However, the PlayStation 3 console we connected to the Humax TV didn’t produce the same result going through the same HDMI connection. Pictures from Blu-ray DVDs on the PS3 were extremely clear and line free.

The Humax Amadeus only comes with a single HDMI connection. That’s likely to be OK if you’re using it as a secondary model in a spare room or bedroom but might niggle after a while if it’s your main telly. On top of that, it also comes with an RGB Scart, S-Video input, Component input, Composite input, PC input, PC audio input, headphone output and a CAM slot.

The menu system is extremely basic. That should idiot-proof it, although there are a few things to get used to. For example, the PVR functions only become active in the menu when the portable drive is plugged in and you’re watching something that can be recorded.

Overall, the Humax Amadeus 22-inch HD Ready TV is a solid, if uninspiring, choice. If you’re looking to make good use of the sound quality by playing your MP3s, then it’s definitely worth a look. But if you’re simply looking for something in this sizewith these specs, thee are plenty of competitors out there and most won’t have their PVR functions built inside rather than out.