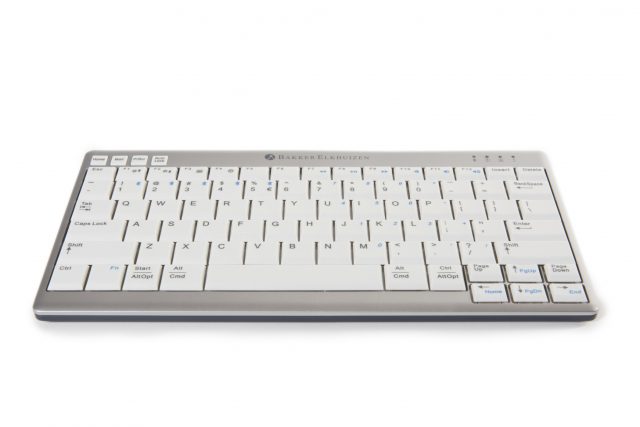 Compact keyboards are great for those with limited space. With the UltraBoard 940, BakkerElkhuizen can be used wired and wireless, and connect to PCs, Macs, iOS and Android devices via Bluetooth. Moreover, it can be paired with up to five different devices.

from an ergonomic point of view it is better not to move your right arm too far away from you to operate the mouse, and not to make large movements. have to make when you switch from mouse to keyboard and back again. If you need a numerical part, then it is better to use it separately, or at least that is the general wisdom of the ergonomists.

The row of function keys, for example, is placed a lot closer to the number row, which we are not necessarily enthusiastic about, because missing becomes a greater risk. Fortunately, the vertical distance between the rows is still fairly large due to the sloping lower edge of the keys. Another change is the relocation of the Home, Mail, PrtScr and NumLock keys to a separate row with four mini ‘calculator’ buttons that were not present with the 860. That board had a PrtSc / SysRq and a Pause / Break key on the left next to the Insert and Delete buttons, on the right next to the function keys.

The smaller size also ensures that the Backspace, pipe/backslash, Enter and right-shift have shrunk considerably in the wash. The same applies to the left, especially for the Tab. Another consequence is that neither a right-hand Start button or a context menu button is present.

Remarkably, BakkerElkhuizen has managed to keep the arrow keys to their original size and fortunately without dividing the vertical cursor keys – but it has now also physically implemented the Page Up and Down keys, in addition to being able to use them as secondary functions of the vertical cursor keys using the Fn button. Given the usefulness of these keys to browse long documents and web pages, we do follow the line of thought, but a regular numeric part has the Home on the left and the Page Up buttons on the right. We are never a strong proponent of deviations from the standard layout.
A change that did not lead to gains in space and, in our opinion, is less successful is that the keys on the sides are less inclined, so that the touch surface has become closer to each other. This increases the risk of failure rather than less.

The print of the keys is now also easier to read (the print deserves separate mention because it is very sharp), certainly the blue of the secondary functions. In terms of height, the UltraBoard 940 is identical to the predecessor.

A striking difference concerns the two USB ports, on the left and right-hand side in front. This only work when the board is connected via the included micro-USB cable, with which it can charge the supplied NiMH batteries as well as send input and data to the PC. That is not common; with mice we sometimes see it, but both connecting and working via the USB interface and via Bluetooth is a useful added value for us. A cable is not as handy as wireless, but still better than being without power and therefore unable to tap. As far as the USB ports are concerned: we sometimes find them on gaming keyboards, but this is considerably less often the case with office models, certainly on such a small size.

Connecting to Bluetooth is a piece of cake. The UltraBoard has the ability to connect to five different ‘host’ devices. By selecting one of the first five-digit keys in combination with the Fn key and then activating the Bluetooth detection mode, the device with which you connect is linked to the relevant digit key. Switching is then a matter of Fn + number. So you can switch between a desktop PC, a Mac notebook and, if necessary, your Android phone if your WhatsApp conversations are really out of tune. The Bluetooth connection turned out to be good, also with the included batteries. Ultimately, because an early version that we had from the board got an unstable connection when the available voltage in the batteries decreased too much. That was clearly improved with a later hardware revision. BakkerElkhuizen clearly states that if you experience this, you can exchange the sign under warranty.

Typing on the UltraBoard 940 takes getting used to. The shorter distance between the keys causes more misses, and the touch is quite light, which makes the keys seem to rattle somewhat – the cause is probably that the type sound has a fairly high frequency, making it more noticeable than a comparable volume of another keyboard.

The reality is that the keys are very solid, but everything seems a bit thinner than the illustrious predecessor. The left Ctrl keys and also the Fn key have a considerably heavier attack than the surrounding keys. A weight of around 55 grams is sufficient for a keypress, for these two keys it is 65 grams. It is not very disturbing since you usually do not use these keys when typing blind.

As a mobile keyboard, the UltraBoard 940 is unique, because this terrain is dominated by mostly cheap, not very decent derivations of Apple’s iconic chiclet keyboard. There is no doubt that the touch of the UltraBoard 940 can easily handle that comparison, although the touch remains a matter of personal taste. Some people would prefer to type their magnum opus on a Casio calculator. The multi-typist outside the door has a great buy on the UltraBoard 940, and it is also an advantage that he or she can continue to work: if the batteries are empty, a micro-USB cable is all that is needed to continue (since your device has the correct connection). The USB connections are also handy.