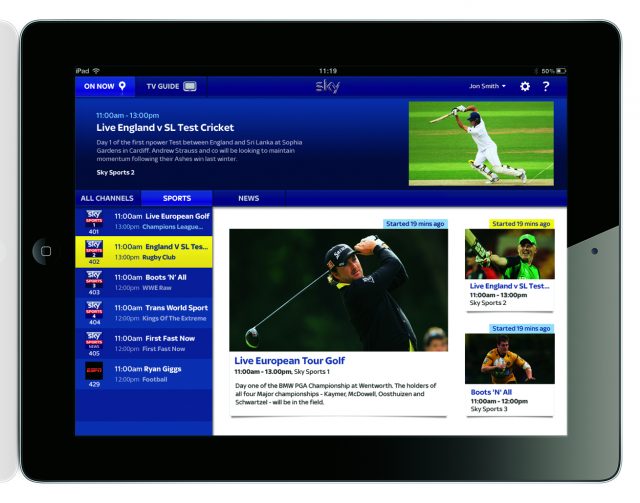 Anyone with an iPad and a Sky+ box can now turn there tablet into a fully-functional Sky+ remote to control their Sky+ HD box.

The new app allows users to pause and rewind live TV or recordings using swipe gestures. It will also allow Sky subscribers to look through Sky+HD Planner and add or delete recordings without interrupting TV viewing.

The free app available from the iTunes store and according to Sky is one of many to come in the future. No announcement has yet been made regarding Android and smartphone versions of the update.

“In the year ahead, we have a strong pipeline of innovative new products and services planned for release,” the company said in its latest earnings report. “We plan to enhance the functionality of the Sky+ app to allow customers to use the iPad as a remote control for browsing the EPG, managing their Sky+ planner and selecting programmes to watch, pause, fast forward and rewind.”

The company has also added another eight children’s channels to its Sky Go on-demand service including Cartoon Network, Disney Channel and Nickelodeon.  Sky TV customers with the Entertainment Extra pack can view the programming at no extra cost.

Channel 5’s Demand 5 catch-up service was announced as coming to Sky Anytime+. It joins BBC’s iPlayer and ITV Player as part of the Sky service. The content can be accessed via the main Sky Anytime+ menu.

According to latest figures, 4,343,000 of Sky homes now have HD installed, which is half a million up year-on-year.