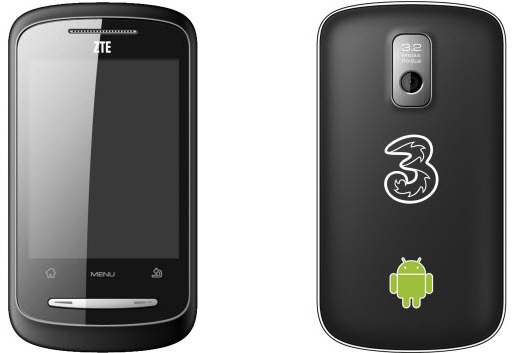 Most Android smartphones have a big price tag (admittedly not as big as the iPhone) which means that for the average joe, smartphones remain out of reach. ZTE has tried to address this problem with the launch of its £99 ZTE Racer mobile.

The Racer is the first of ZTE’s Android releases and sports Android OS 2.1, so it’s almost bang up to date on the operating system front. The vendor has partnered with mobile operator Three to bring the price down to a mass-market level and put features on the phone, such as free Skype to Skype calls and cheap contracts.

The phone is a typical candy bar form factor and features a 2.8-inch resistive screen (which keeps the handset price down but will annoy anyone that is used to a capacitive screen). It is also quite a light phone, weighing in at 100 grams.

Under the touchscreen are the buttons for home, menu and back. Oddly enough these are also touch sensitive. Maybe physical buttons here would have been cheaper so we could have a capacitive screen above. But we shall never know that for sure. There are tow physical buttons to receive and end calls.

Above, lies the power button, which also locks the screen. This is finicky to use at times. There is also a 3.5mm headphone jack to listen to music and a micro-USB port which also acts as means to charge the battery.

The interface is the bog-standard Android one. None of the HTC Sense UI business here, but that is not really a problem and should make upgrading the OS that little bit easier.

There are three home screens to choose from and navigating between them takes time as the screen really isn’t that responsive in use.

Inside there is a 600MHz Qualcomm processor and 256MB of RAM which does allow the handset to move at a reasonable, if not blistering pace.

On the screen are some icons related to mobile operator Three but not much else in the way of customisation. Wth Android at least you can have your Facebook and Twitter social netowkring but nothing as integrated as you may find on the Sony Ericcson X10.

There is a fully-funciton sat nav which Google Maps takes advantage of. and works quite well for a budget phone.

Using the screen to write emails and surf the web can be daunting as the screen makes the process difficult to the point where you think a stylus maybe a good idea.

But at least with a 7.2Mbps HSDPA, thanks to the Three network, downloads are OK. There is also wireless 802.11 b and g as well.

Media performance wise, the Racer exceeded expectations with the speakers managing some decent output. But when on the move, music and video jumps when the accelerometer starts and viewing video on a sunny day is a non-starter.

There is also a 3.2-megapixel camera. The images from the camera are OK, but the shutter speed is poor meaning that taking pictures is not a great experience.

The battery will last all day but if you use the functions that the phone has this will decrease.

Overall, if you are on a very tight budget then it is worth considering, but for a few quid more you may want to consider the HTC Wildfire.