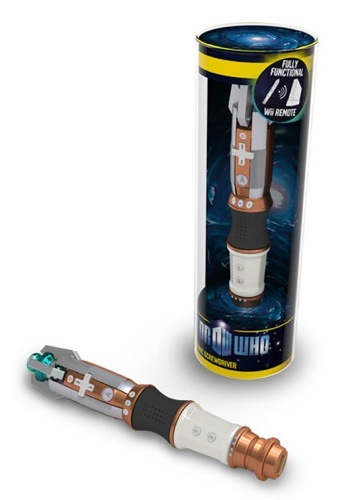 As you may or may not know, there’s a new Doctor Who game on the way for the Wii this winter. The Doctor is known for using his sonic screwdriver. The Wii has a controller that is roughly the same size and shape as said sonic screwdriver. Hmm. Hmm.

This newly unveiled sonic screwdriver controller isn’t just a plastic shell for the basic remote, it’s a wholly new controller rejigged to resemble the Doctor’s trusty tool-of-all-trades. The work of a deal between BBC Worldwide and Blue Ocean, we’re not sure if the end lights up, but we want one anyway.

And wouldn’t you know it, the DS is getting in on the act as well with some new Who-branded accessories, including a screwdriver-shaped stylus.

All the plastic bits and bobs will hit shops next month, in preparation for Doctor Who: Return to Earth (Wii) and Doctor Who: Evacuation Earth (DS) arriving in the winter.