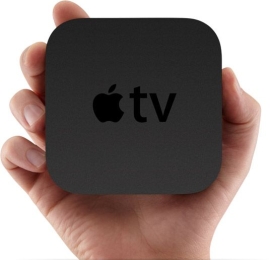 You have to admire Apple for not giving up on a bad thing by refreshing its much-derided Apple TV.

Speaking at the YBCA Theatre in San Francisco, Apple CEO Steve Jobs said that while the original Apple TV hadn’t been a success in terms of sales, those that did buy it (presumably Apple fanboys that will buy anything with an Apple logo on it), loved it.

The device, which streams music, video and photos to a connected television, had not got everything right, conceded Jobs. In true Jobsian style, he lambasted other manufacturers of multimedia devices for making the same mistakes.

Jobs said that Apple had learnt much from customer feedback and the new device, much smaller than the previous iteration, would pack more of a punch in terms of features.

The new Apple TV, only needs a power cable and an HDMI cable to get going. It sports 802.11n wireless networking but also boasts an Ethernet connection for hard-wiring into a home network.

There is also a S/PDIF for connecting older AV receivers. The device has also ditched storage, which means the unit is purely for streaming. Although, we spotted a USB port which may allow the connection of external storage directly.

Jobs added that consumers wanted professional content and not “amateur hour”, HD in favour of SD and a box that was small, silent and dirt cheap.

New movies will cost £4.99 (whether in HD or SD) and TV shows will set customers back 99p.

The new Apple TV will also stream content from other Apple devices using the renamed AirPlay functionality. This means that movies on an iPad can be streamed to a TV connected to an Apple TV unit.

The new unit will costs £99 in the UK, while Americans can pick up the same item for $99.