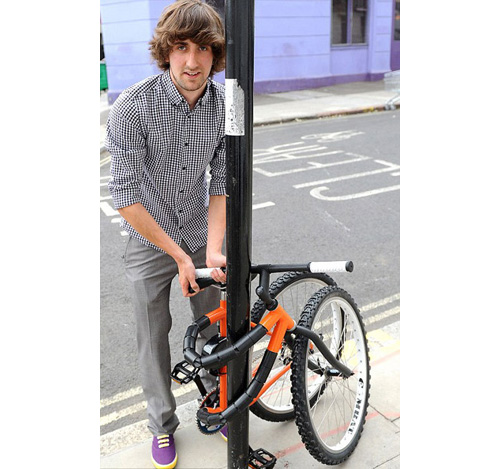 If the risk of death isn’t enough to put you off cycling around this great city of ours, then surely the possibility of having your bike stolen will put you off. However, one enterprising engineer has come up with bike that can bend and lock itself around a lamppost.

The bike was developed by a young British industrial designer Kevin Scott. It can be folded around a pole and secure itself without a separate lock. But while the bike frame can bend, it remains rigid when ridden. A lever allows the cycle to becomes flexible.

The bendable section of the bike’s frame is made out from glass-filled nylon sections and this prevents the bike from being stolen. The design also means that is can take up less room when being stored.

The designer won second prize at the New Designers 2010 competition, which different designers complete all over the UK. Second place meant that Scott won 500 pounds, which, he said, would be used to fund the bike’s development..

He said more investment would be needed to refine the design of the bendable bike and he was looking for suitable entrepreneurs to help get the bike into mass production.