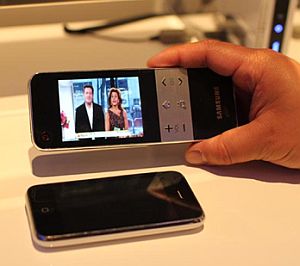 AG has TV envy. Yes, we’ve seen some of the newest, slimmest LED models available to man (or woman). But this particular Samsung LED has us all hot and bothered for a different reason – its awesome remote control.

The Samsung C9000, which debuted earlier this year at CES, was shown off at a promo show set up by John Lewis, as the store will be stocking the premium product. And as much as the pretty hi-def images impressed, it was that touchscreen remote control that was the killer add-on.

Samsung hasn’t wasted the 3-inch screen on the peripheral, instead allowing it to display what’s on the TV should you pop out of the room to stick the kettle on. Better yet, you can watch a different channel on the remote – great if you want to preview the other channels before you switch over!

Other features of the TV include:
* Cloning – the remote will take over the functions of any other remote control
* Stream directly to the C9000 by connecting it wirelessly to your home network
* Skype video calling with the add-on camera (prev story)
* Movie file playback for a range of file formats direct from a USB drive
* One powered USB port that will power a hard drive so you can access content on it, or recharge the remote or the 3D glasses
* 2D to 3D upscaling for DVDs, freeview and games – “It won’t be as good as dedicated 3D but will give it that feel,” admits Alan Cox from Samsung.

Cox also confirmed that the BBC iPlayer will launch very soon on all Samsung [email protected].