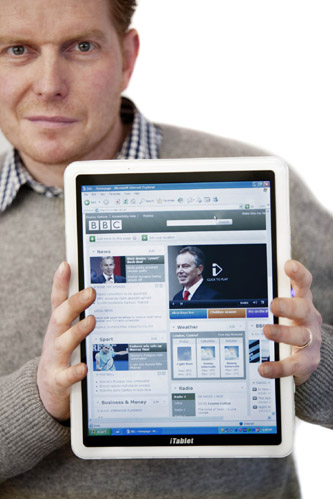 No sooner had the Apple Fanboys gasped in awe at Steve Jobs’ new iPad then a plucky British company launches its own take on something that is not quite a phone but not quite a laptop. Behold the iTablet!

Brit firm X2 has gone and launched a new tablet device with more of a hint of Apple goodness (but presumably not enough so as to stir the fruit-based computer lawyers). Called the iTablet (which was one of the names mooted for the iPad), the device is pitching itself at this new market.

The iTablet comes in two versions (10-inch and 12-inch touchscreens), both run a 1.6GHz Intel processor and sport a 250GB disc and come with Windows 7 and support for multi-touch as an option.

The iTablet will be available from April, oddly enough around the same time as the iPad. No pricing details as yet but we think it should undercut the iPad.

According to Robin Daunter, Technical Director of X2 Computing and formerly Head of R&D at Evesham Technology the iTablet can be used in a wider range of business and home environments and “will deliver a lower cost of ownership over the operational life of the equipment.”