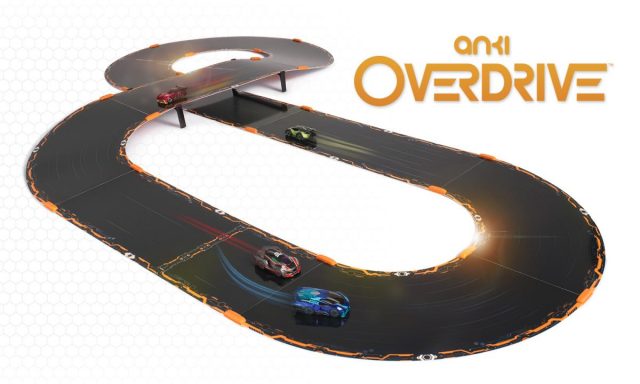 If you liked Anki Drive, then the new Anki Overdrive promises custom racetracks and the same level of great gameplay.

The robotics and artificial intelligence company will start shipping the new race track and cars from 20 September. Players control physical supercars via handheld mobile devices to compete against friends, family or AI commanders. The game introduces an innovative magnetic modular track system that allows gamers to custom build their own battlefields within seconds.

The latest game promises new game modes such as Time Trial and King of the Hill expand on the popular Battle and Race modes returning from Anki DRIVE. In Time Trial, players find the perfect path to beat the clock, and King of the Hill is chaotic fun as players battle for the crown to see who rules the road by holding the lead position the longest.

Players in Anki OVERDRIVE control a variety of highly detailed robotic supercars on tracks they’ve assembled in their own living room. The supercars are customizable with hundreds of new virtual weapons, upgrades and special items for all-out vehicular mayhem. Cutting-edge AI allows the cars to fully control themselves on the tracks and use diverse strategies to fight to the finish. The game supports up to 4 players at once, with any combination of human and AI players. Team Play and Balance Cars settings add even more variety and fun for matchups of experienced and novice players.

“Anki DRIVE was an unprecedented success – not only because it sold out early last holiday season due to overwhelmingly high demand, but because it represented an original concept in entertainment. We were able to introduce a completely new play experience that blended the best of video games, toys and robotics in a unique and entertaining way,” said Boris Sofman, Anki founder and CEO.

“We’re proud to be at the forefront of a tech movement helping to push the toy industry forward and we are very grateful for all the support our fans have shown us. Anki OVERDRIVE is the next evolution in robotic gameplay, giving players the ability to create a more customized battle-race experience.”