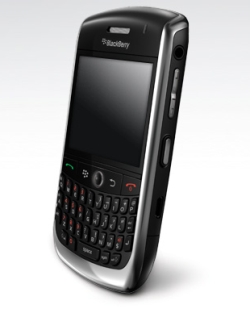 It’s been quite a while since we first got our paws on a Blackberry Curve and it’s thrown on quite a few extra numbers since then. From 8320 to 8900 is quite a leap – but do the numbers stack up?

Well, our first problem last time around – and don’t call us shallow, we have hidden depths – was the way the previous Blackberry Curve looked. It seemed to be going for retro chic, but with all the pretty handsets around at the time fell somewhat wide of the mark. The new model is a lot more handsome, even if it still won’t give those sleek, shiny supermodel handsets too much to worry about.

We’re still big fans of the Curve’s keyboard, which scores major points over touchscreen efforts – although it is starting to be outclassed by the slide out keyboards on modern mobiles. And the phone now comes with GPS and Wi-Fi (that combination usually being an either/or choice on Curve models back in the day). As part of that, Blackberry Maps can be downloaded if you sync with your PC.

The camera has also been given a boost from a fairly ordinary 2-megapixel model in 2008 up to a much more usable 3.2-megapixels. So you’ll actually be able to sell that picture to The Sun if you catch a celeb doing something naughty. And – thank god say all the YouTube addicts – it’s now got a video camera to turn your 2D adventures into fully rounded films. It’s only accessible from the clickwheel menu once you’re in the camera, though, so no spontaneous recording. At least the camera itself can be launched using a button on the side.

Overall, the Blackberry Curve 8900 is a real improvement. Research In Motion has already made great inroads into the consumer market with the Pearl but it continues to blur the boundaries – in a very positive way – between business and pleasure. The Curve 8900 is still a fairly large phone to place next to certain fashion models, but there’s certainly no embarrassment factor anymore.