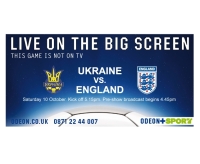 England make history today. That’s because the football team’s World Cup match against the Ukraine will only be streamed live on the internet. Kentaro is transmitting the game on the net for a cost of £4.99 if you booked early or £11.99 if you bought it from 8 October.

However, the quality of the coverage will be much poorer than a regular television signal, as it is being streamed at a lower level than the BBC’s iPlayer.

The FA, England’s football governing body, said it had no other choice but to allow the pay-per-view internet-only transmission, as none of the major broadcasters bid for the game.

Kentaro had originally sold the rights to Setanta, but the collapse of that company left the game without a broadcaster.

Fans groups have voiced their annoyance but ISPs seem to be gearing up to deal with any possible extra need for bandwidth.

However, Odeon has stepped in to show the streamed match – obviously in improved quality – in 13 of its cinemas.

“Pre-show broadcast, presented by Sven-Göran Eriksson commences at 16:45. Come out and support the England team, larger than life on the big screen,” an Odeon statement reads.

“Watch the match live from the Dnipro Arena in Dnipropetrovsk, Ukraine. The international clash is the toughest competitive match that the national team will face before the World Cup in South Africa next year.”