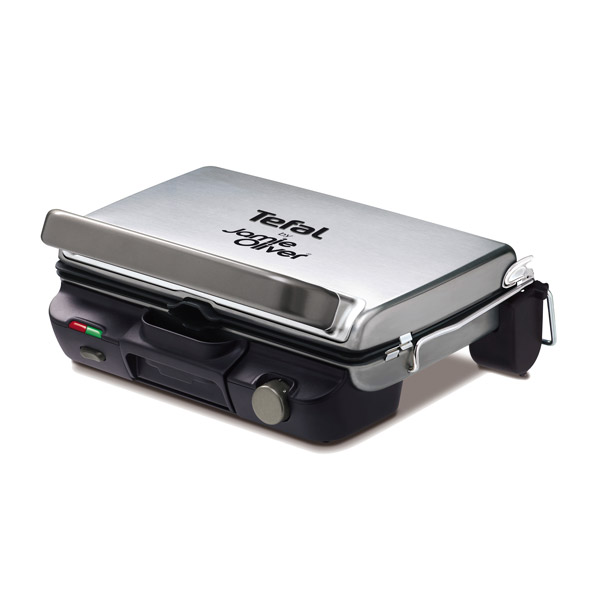 Boxer George Foreman has managed to make a successful second career from health grills but will he be able to compete with relative newcomer Jamie “pukka” Oliver with his spin on this kitchen gadget.

The grill itself is more than just a standard health grill. It also sports “oven” and “barbecue” functions as well.

Out of the box, the grill looks compact and styled in a modern way that will complement most kitchens with is silver and black finish. The grill is what most people will use on a daily basis and can cope with any food up to 3.5cm thick and we managed to squeeze about five bacon rashers into the 19cm by 30cm grill surface. The bacon gained a nice grill strip to boot and maintains moisture and did not taste dry.

Panini rolls under the grill function worked particularly well. Not only was the bread toasty outside, but the filling was hot and cooked through (which surprisingly is not the case with other such grills we’ve experienced). The dial on the front allows you to set the temperature rather than relying on hte simple on/off settings on other grills.


Next up is the oven function. Basically to use this function, you fiddle around with the hinges and other such until the top grill is higher and you have a greater space inbetween to bake stuff. We tried a couple of steaks and again the grill functioned perfectly.

Lastly there is the BBQ function. To access this you simply pull the grill top out and you open it out to double the cooking surface. Cooking kebabs and sweetcorn and veggie skewers  was quick and thorough.

Unlike a lot of these grills the plates can be detached and placed in a dishwasher. Often when this happens, the plates never truly get hot, but somehow Tefal has managed to make the plates easily washable with compromising the grill temperature.

We really like the fat capture. Instead of chucking an extra bowl under the grill the receptical is integrated into the device and easily removed for cleaning.

Overall, we can see this being used all the time in the Absolute Gadget office, if it was a little bit bigger it would be perfect. We could see this pallid mockney chef deliver a killer blow with this grill.