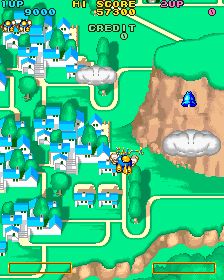 As the end of the Virtual Console Hanabi Festival draws near, two further Virtual Console corkers are being added to the mix: Detana Twin Bee (or Detana!! TwinBee as it was known) and Kirby’s Dream Land 3 – released here for the first time.

Kirby’s Dream Land 3 (Super Nintendo)
"The mischievous King Dedede is back! Now possessed by an evil force, the King is causing trouble and strife all over Dream Land. Only Kirby, the powerful pink puffball, can save the day. Previously released only in Japan and the U.S., Kirby’s Dream Land 3 features crisp, colourful 2D graphics and a simultaneous two-player mode.
As before, Kirby can swallow his enemies and absorb their abilities – fire, ice, stone, spark and more. Kirby can request help from his animal friends like Rick the Hamster, Coo the Owl, Nago the Cat and can also summon his stretchy-tongued pal Gooey, controlled either by the computer or a friend.
Packed full of cuteness and charm, this classic example of 16-bit platform gaming makes its European debut here and now, on Virtual Console."
Cost: 900 Wii Points

Detana Twin Bee (Turbografx)
"This popular vertical scrolling shooter is renowned for its cute, comical world and goofy enemy aliens.
You take on the roles of TwinBee and WinBee, flying through the sky on a mission to save the planet from evil alien invaders. Standing in their way are six stages, full of crazy aliens. Play as TwinBee in one player mode, or team up with WinBee in two player cooperative mode.
With powerful attacks like Big Shot, along with Twin Attack and Burst Attack in two player mode, there’s plenty of sting in their arsenal. Use your Shot to transform Bells that appear in stages into items with various effects. Stock up on these items to expand your attack range and make those aliens buzz off."
Cost: 700 Wii Points