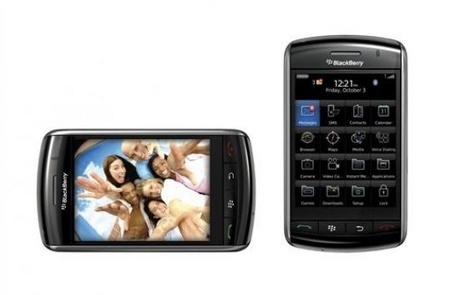 Fancy a BlackBerry that sports a ‘clickable’ touch screen? Vodafone did, so it got together and cooked up a Storm with smartphone maker RIM: the Blackberry Storm.

The Storm is the first ‘clickable’ touch screen smartphone purpose built for Vodafone and it includes some BlackBerry familiars.

The tactile 3.25-inch screen gives users the sensation of actually pressing down on virtual keys which also light up when touched. Customers will also have the choice of using a full Qwerty, SureType or multi-tap keyboard.

Frank H Rovekamp, global chief marketing officer at the Vodafone Group, said the BlackBerry Storm was the result of a long term strategic alliance between Vodafone and RIM.

"With its unique clickable touch screen, giving access to all the desirable multi-media features and services such as browsing, music and video, turn by turn satellite navigation, messaging and social networking, and BlackBerry’s mobile heritage and strong business reputation, the BlackBerry Storm is being brought by Vodafone into the consumer world," he said, without taking a breath.

The BlackBerry Storm will be available exclusively on Vodafone’s high speed 3G mobile broadband network in Europe, India, Australia and New Zealand from next month (it’ll be exclusively on Verizon Wireless in the US).

Features include:
* 3.2-megapixel camera with video capabilities
* 480 x 360 pixel resolution display
* Switch from portrait mode to landscape mode as the handset is rotated
* Removable battery
* Up to 16GB of exchangeable memory.