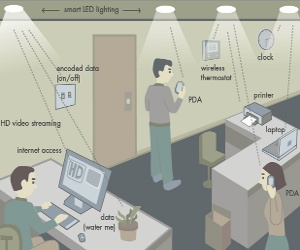 Some people
believe that electromagnetic radiation is causing them pain, discomfort
and a host of diseases. Those people are just plain weird. But in case
you feel that your wireless router is trying to kill you then you may
be interested in some research which could turn your light bulbs into
network access points instead.

Researchers at Boston University’s College
of Engineering
is developing wireless communications technology based
on visible light instead of normal radio waves.

The research is
looking at piggybacking data on low-power light emitting diodes (LEDs).
It is hoped that this "Smart Lighting" would be faster and more secure
than current network technology.

"Imagine if your computer, iPhone, TV, radio and thermostat could all
communicate with you when you walked in a room just by flipping the wall light
switch and without the usual cluster of wires," said BU Engineering
Professor Thomas Little.

"This could be done with an LED-based
communications network that also provides light – all over existing power lines
with low power consumption, high reliability and no electromagnetic
interference. Ultimately, the system is expected to be applicable from existing
illumination devices, like swapping light bulbs for LEDs."

More on next page….

{mospagebreak}The
ability to rapidly turn LED lights on and off – so fast the change is
imperceptible to the human eye – is key to the technology. Flickering
light in patterns enables data transmission without any noticeable
change in room lighting.

With widespread LED lighting, a vast
network of light-based communication is possible with devices within
sight of an enabled LED sending and receiving data though the air with
each LED serving as an access point to the network.

Since this white light does not penetrate opaque surfaces such as
walls, there is a higher level of security, as eavesdropping is not
possible. LED lights also consume far less energy than RF technology,
offering the opportunity to build a communication network without added
energy costs and reducing carbon emissions over the long term.

Currently the researchers reckon that the network could be capable
of speeds of 10 Mbps, but future generations could go much higher. The
research also assumes that people will switch over from normal lighting
to new LED lights (and that assumes that these LEDs will actually
produce enough light so you can actually see your way around the house.)

The US government is funding the research known as the Smart Lighting Engineering Research Center, and according to Little the research has other applications.

"This
technology has many implications for automobile safety," said Little.
"Brake lights already use LEDs, so it’s not a stretch to outfit an
automobile with a sensor that detects the brake lights of the car in
front of it and either alerts an inattentive driver or actively slows
the car."