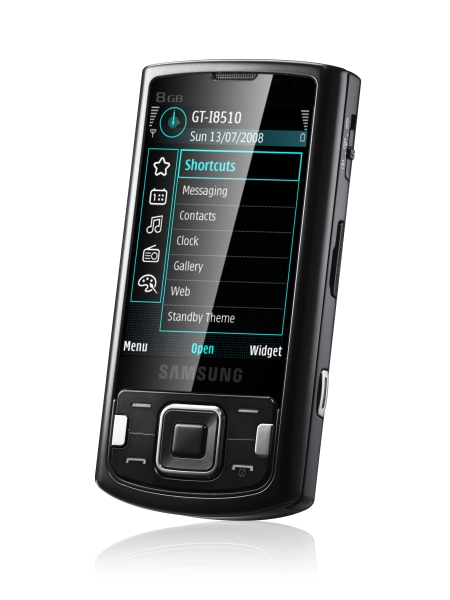 The latest (if we ignore the Omnia, which we’re happy to do) offering from Samsung has been dubbed “The ultimate Entertainer” by the company. Big claims, but ones that are backed up by an impressive 8-Megapixel camera and a whopping 16GB internal memory! Get your hands on SanDisk’s 16GB SDHC card in October and you’re really starting to rock…

Everyone concentrates on the big numbers when it comes to phone cameras, but do the 8-Megapixels of the i8510 (AKA the Innov8) deliver? Well, the quality of its snaps is excellent, with a cracking zoom to show detail even on close ups.

There are also lots of bonus features that might make you drop your regular compact camera and just carry this in your pocket. The panorama mode allows you to stick a number of shots together to easily create a much larger image. This worked extremely well – much better than the blink mode, which is supposed to catch head shots when people have their eyes open but still managed to catch that attractive ‘asleep on the job’ look occasionally. There’s a similar feature to snap you when you’re smiling, too, but again it occasionally gets its timing wrong.

Images are handsomely displayed on the screen, which is a good size for easy viewing. However, should you need to see them a little bigger (or, for that matter, watch a DivX movie) the i8510 also has a TV out port. Forget a carousel of slides and a darkened room, now you can subject your friends to your holiday snaps in their own home (joy!).

These days phones need to come with all those functions we can’t frankly live without, and the i8510 has them in buckets. Ticking the connection boxes are Wi-Fi and Bluetooth, while applications go from video editing to Google maps are complemented with all your social networking taken care of via ShoZu for the Facebook and MySpace addicts. There’s even a couple of good games to stop those bus journeys dragging on and links to quality content such as CNN to keep the more serious minded up to date on all the breaking news.

One problem we did find – although many slider phones are guilty of this – was that in your bag or pocket there is the chance that it can open. Not a problem if its locked and has to be manually unlocked, but this seems to unlock when the screen slides up, putting you at greater risk of making those hideously expensive ‘pocket calls’ and also annoying mates who have to then listen to your conversation, snoring – or worse!

While the entertainer tag holds up well, what of more serious functions? Well, there are some handy office-type applications such as Adobe PDF and quick office. Don’t believe the icon, though, you’ll still need to buy Microsoft Office Mobile if that’s your office app of choice.

Looks-wise, the i8510 closely resembles the Nokia N series in design and there have been a lot of recommendations that Nokia fans will love this – especially as both phones use the Symbian S60 operating system. The i8510 does manage to retain enough characteristics to mark it out as a Samsung device, though. Overall, while this has plenty going for it and we recommend you at least give it a test drive at your local store, we still think those hardcore Nokia fans are unlikely to release their N-Series phones from service just yet.

Most mobile phones not come with an 8+ mega pixel camera, for a full list visit http://blog.dialaphone.co.uk/