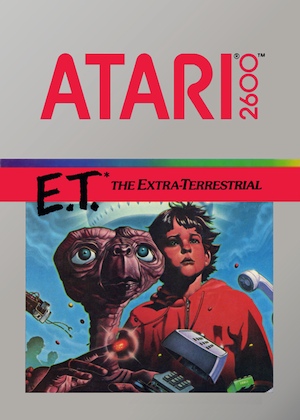 One of gaming’s most enduring urban legends was proved true this weekend, when Microsoft dug up copies of the legendarily terrible E.T. game from a landfill in the desert.

The game, one of the first examples of a film tie-in (and one of the first examples of how tie-in games are usually awful), is generally considered among the worst ever made and partially responsible for both Atari’s collapse and the video games crash of 1983 that saw the bottom fall out of the American market, allowing Nintendo to waltz in a couple of years later and establish Japan as gaming’s homeland.

E.T. was made for the Atari 2600 in five weeks towards the end of 1982 and largely programmed by one man. Atari, presuming it would sell well, ordered millions of copies pressed and were left with a huge backlog once it became apparent no-one was buying it because of its shoddiness.

Not long after, during the 1983 crash, rumours began to swirl that the company had buried thousands of copies, along with other unsold games, in a landfill on the outskirts of Alamogordo, New Mexico. The legend persisted until recently, when an unnamed gamer did some research and worked out the presumed location. Microsoft got involved, deciding to make a documentary about the site for broadcast on the Xbox’s TV channel. After the various bits of red tape were cut through, digging started on Saturday and copies of E.T. and other games (including Centipede) were found after three hours’ search, most still in their original packaging. The dig was only allowed for a day, so a small amount of material was gathered up and the site was filled in again.

Check out the Twitter feed of Larry Hryb – better known as Xbox Live’s Major Nelson – for more information and pictures.