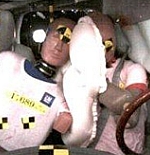 General Motors has created a new airbag that deploys between the two front seats to protect occupants from being thrown into each other if a car crashes.

The new type of airbag pops up between the front seats to stop the driver and front passenger injuring each other.

GM said the device could help prevent 29 per cent of fatalities that are caused by side crashes, as well as preventing some head and spinal injuries.

The Front Center Airbag will be fitted to some of GM’s crossover SUV vehicles next year – starting with the GMC Acadia, Buick Enclave and Chevrolet Traverse.