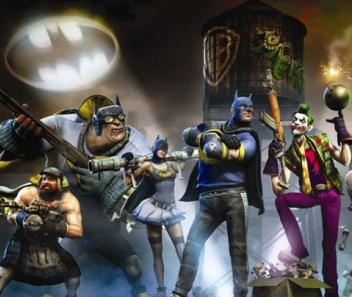 Whisper it… “I’m Batman.” Given that it would take a lifelong training regime, billions of dollars and a crippling mental illness to actually be the caped crusader, surely there has to be an easier way…

Yes, everyone wants to be him – from little boys to Fathers For Justice – and Monolith Games is finally encouraging this sort of thing with Gotham City Impostors.

The fun twist on DC‘s superhero also offers players a chance to stand against the Dark Knight as his ultimate supervillain foe: The Joker. The multi-player first-person shooter will be team-based, with players joining Team Bats or Team Jokerz in fights featuring maps based on the DC Comics universe.

Early signs are very encouraging: Monolith’s previous work on F.E.A.R. and Condemned was solid and the customisation in Gotham City Imposters looks very tempting. Players will have choices of gadgets (grappling guns and the like), weapons (shooters, obviously) and body type (speedy, heavy, etc).

Naturally, players can dress their avatars up in an eccentric approximation of their hero/anti hero, as the image illustrates.

No release date or price just yet, but Monolith Games and Warner Bros. Interactive Entertainment have announced the game will come as a download for PC, Xbox 360 and Playstation 3.