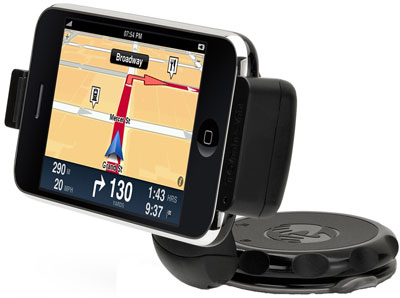 The TomTom car kit for iPhone has been around for a while (it was launched around the same time as the iPhone 3GS in June 2009) so how does it stnad up to being used constantly for months on end?

The cradle came out the same time that turn-byTurn navigation apps were finally allowed to work on Apple’s smartphone. More than just a piece of plastic to keep your iPhone in place, the TomTom car kit can also charge the iPhone as well as coming with its own GPS receiver to give the app a boost in receiving satellite signals.

While the look of it is great, to ensure that the iPhone can fit the cradle, any case that it comes in (and it will) has to be taken off in order to accommodate the device.

It can be charge via the mini USB port at the side and there is an auxiliary out to connect to a car stereo (if you haven’t got an aux-in on you car stereo you are rather stuck as the car kit has no FM transmitter.

Another nice touch is the ability to rotate the car kit from portrait to landscape mode just be twisting the unit.

The suction mount is similar to the one pioneered on the TomTOm ONE “EasyPort”. This uses a large flat disc you can turn to secure the suction mount.  It attaches via a small ball joint to the speaker which rotates against the rear of the main cradle for adjustment.

Also, the cradle can slide up and down allowing a wide choice of positions. This means the mount to be used fitted to the dashboard or hung from the windscreen in both portait and landscape modes without the top or bottom of the cradle scraping.

It also comes with a 1.2A cigarette lighter charger as well as an adhesive disk that allows the cradle to be mounted to a flat surface instead of the windscreen if preferred and a getting started instruction leaflet.

As the iPhone uses a lot of battery power when the GPS is turned on, it is a good idea to connect it to the car’s mains power.

And while the TomTom app can get a boost from the GPS receiver in the cradle, any other GPS can use the cradle to work better. TomTom hasn’t limited this functionality to its own products – which is nice of the company.

The car kit does give a significant boost to earlier iPhone’s GPS navigation (and for the iPhone 2G an infinite boost as the phone has no GPS receiver.

The loudspeaker on the back is a marked improvement on the iPhone’s speaker, which means that you should be able to properly hear instructions above the noise of a normal car.

When the aux cable is connected, all audio is fed into your car stereo (navigation as well as music from iTunes). Music mutes when navigation is given.

Overall, a well thought-out piece of kit but with an RRP of around £99, it is more expensive than most car cradles.