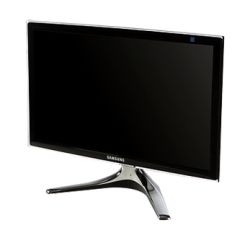 If good looks could kill, someone would be standing over us with a couple of paddles shouting: “Clear!” Your first reaction to Samsung’s SyncMaster BX2350 is that this can’t be a monitor, it has to be a HD TV. With its widescreen format and attractive looks, it’s eye-catching enough that swapping it out in an office full of square Dell screens had everyone taking note (even the MD of a major publishing company stopped on his way through to ask, “Where did you get that monitor?”).

And if you needed further proof of the merging of boring old computer functions and home entertainment needs, then the SyncMaster BX2350 is here to provide the smoking gun. Grooves embedded in the back of the monitor mimic wood panelling, while two shiny silver feet with a 14-inch reach keep it upright in a stylish way. OK, it will wobble ever so slightly if you bang your knee on your desk (easy fix for this, remember where the desk is and stop banging your knee).

The Blu-rays we watched were similarly brilliant. There was a miniscule drop in the quality for games, but then we did have our PS3 under the desk and our faces about a foot from the screen, which is much closer scrutiny than we’d apply if we were on the sofa playing at home. The screen also offers an optimum viewing-angle that stretches pretty far to the sides, so everyone can enjoy that funny online viral vid.

The only real problem was the positioning of the controls at the bottom right of the screen. If you’ve got a crowded desk you will eventually knock one of these buttons. It won’t be the end of the world, but the second or third time you turn your monitor off you’ll curse under your breath loudly enough to raise your co-workers eyebrows. The onscreen menus can be accessed here, and you can also change the source quickly, for example, to flip between Blu-ray player and PC – great for making notes when reviewing a film, as we often do.

There were no such positioning problems for the connections. With ports facing out from the back rather than down towards the ground it’s much easier to swap cables in and out. Your options include two HDMI ports, one VGA port and an audio out, which will disappoint those looking for a DVI port. With this in mind Samsung has included an HDMI-to-DVI cable in the box, making sure this beauty can be connected to most videocards.

We’re often sad to hand back review kit. But plugging in the lowest-common-denominator square Dell monitor once the SyncMaster BX2350 had been taken away was enough to bring a tear to the eye.