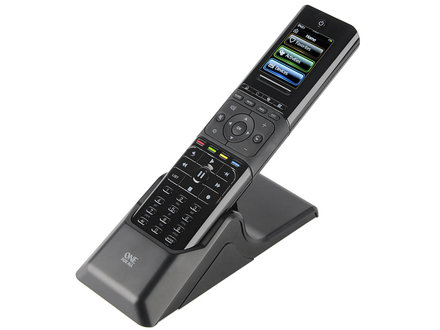 If there is one thing that upsets the missus it is remote control sprawl. There are a lot of the type “one remote to control them all” but for one reason or another the fail to live up to expectations. One for All hopes that its Xsight Touch will put paid to those fears.

Most households will testify that once you get yourself a decent telly, a DVD/Blu-ray player, an amp, etc. you soon have have more plastic floating around your room than Jordan.

The One For All Xsight Touch comes in at around £120, which maybe considered expensive but compared to other similar types costing hundreds of pounds this seems like a fair price. One of the major advantages is that hte Xsight Touch comes with hundreds of codes pre-programmed to work a variety of devices. To order up which device you want to control, you touch the settings button on the LCD screen and enter the remote’s set-up menu. There you choose which type of device you control.

Say if you want to control the TV. you pick your manufacturer from the list and the remote will cycle through the correct codes by getting you to turn the TV on and then it will go thorugh the codes trying to find which one turns it off. Once that is done you have the right code and the controlller is set up.

For devices that aren’t covered by the pre-programmed codes the device comes with EZ-RC software on CD (or downloadable). You can set this up on your computer and plug the remote in via its USB cable. Here you can find more settings for other devices, but this isn’t as simple as doing it with just the remote.

The thing about the remote which sets it apart from most others is the colour touchscreen. The display helps you set up devices while beneath are more (physical) buttons that that can act as short-cut keys for specific activities and list devices.

The screen is large enough to be readable while being small enough to not make the remote too cumbersome. the strip underneath also allow you to page through your devices by running your finger across it.

It is a traditional chocolate bar design that feels good in the hand while operatin and the physical buttons are very usable however some can be difficult to use as they are a little too recessed for our liking.. However the gloss finish can show up even the tiniest fingerprint.

It also comes with a docking stations that can be used to recharge the remote as it will use up power for the screen.

The remote can deal with most, if not all, current devices available on the market over the last few years. Even if the pre-programmed codes and website can’t make your remote work with the obscure Philips V2000 video player, the remote can still learn commands from your old remote.

The touchscreen also allows you to program in channel logos from you favourite TV stations and also can be programmed to with different profiles so different family members can have a different set of commands and devices to control.

Overall, the product is good to use and doesn’t cost too much compared to others on the market. The fact that it has loads of codes pre-programmed should mean that setting up should be a lot easier. The touchscreen gives it extra flexibility even though some of the physical keys beneath are not-so-great to use.

Buy from Amazon – One For All URC8603 Xsight Touch Remote Control