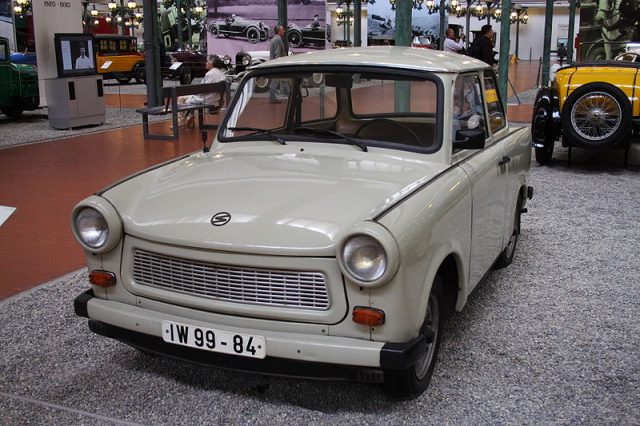 As we head off to the U2 concert tonight, we are reminded of when we watched the Irish rocker’s Zooropa tour, complete with flying Trabant car. Well it seem that plucky East German car is making a comeback, and this time it will save the people from capitalist pigs ecogeddon.

The Communist people’s car, which was considered just about the opposite of the likes of Mercedes, Audi and BMW, could be making a comeback as something green and environmentally-friendly.

The old Trabant was about as damaging to the environment as you could get. It was made out of plastic, had a smelly two-stroke engine that belched out smoke like a sink council estate 16-year-old mother of fourteen. It was said that the car gave communism a bad name (although we would say the slaying of countless millions in Stalin’s Russia would give that concept a run for its money).

However the new shiny, possibly more democratic Trabant will come with a modernised electric-engined prototype called the “Trabant nT”. It will be unveiled at Frankfurt’s International motor show next month.

The company behind the comeback car, IndyKar, aims to product the car for the many and not just the bourgeoisies few should it attract new investment.

At present there are still 50,000 of the original cars in Germany and IndyKar spokesman Jurgen Schnell said that the new Ostagie motor will not be a retread: “It’s going to be simple, practical and in the tradition of the original. But it will have the newest technology and be purely electric.”

“The German government says it wants to see a million electric cars on the road by 2020 and we wanted to fit into this concept,” Mr Schnell said.