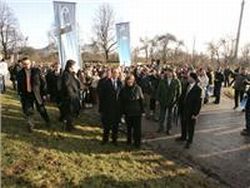 It used to be the mantra of phone-related advertising that you let your fingers do the walking. Now O2 is getting German workers to let their feet do the same thing…

Doing exactly as it says on the tin, the campaign intends to encourage employees to improve their physical activity.

The ‘Physical Activity and Health’ campaign initiated by the Federal Minister of Health aims to motivate people to take 3,000 steps extra every day.

During the next couple of weeks, employees will build teams who will use pedometers to score for their own health and for charity.

We have no idea what this has to do with mobile phones, but wouldn’t a better tie in with the German campaign have been the Nike+ iPod trainers that monitor your fitness?