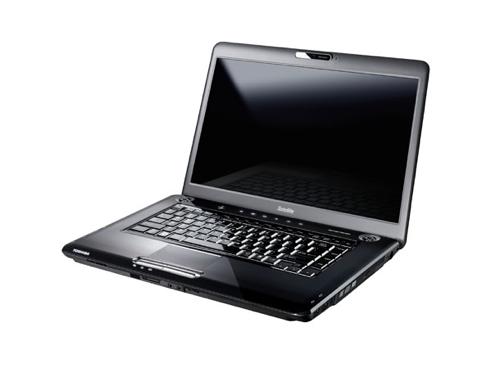 Toshiba has been busy of late adding to its portfolio of desirable
notebooks with the addition if its new A350 widescreen laptop.

The laptop marks a first for Toshiba with a 16-inch widescreen display.
It has a high-definition resolution of 1366 by 768. The downside, and
rather unsurprisingly, the device lacks a Blu-ray optical drive.

Specifications-wise, it sports a 2.10GHz an AMD Turion Ultra Dual Core
ZM-80 (there is also an Intel Core 2 Duo processor model), 4GB
DDR2 RAM, a 320GB hard drive and some
integrated Stereo Harmon Kardon speakers with Dolby Sound Room
technology so you can have a bit of home cinema in your bedroom. Of
course, some of these items come at the higher end of the notebook.

There are three USB 2.0 ports as well as an HDMI port for connecting up
to a HD TV. It also comes with wireless (802.11a/g/draft-n), Bluetooth
and Vista as the OS.

There is also a 1.3-megapixel camera on board. The thing weighs in at
2.94kg and should last two hours 15 minutes on the battery supplied.