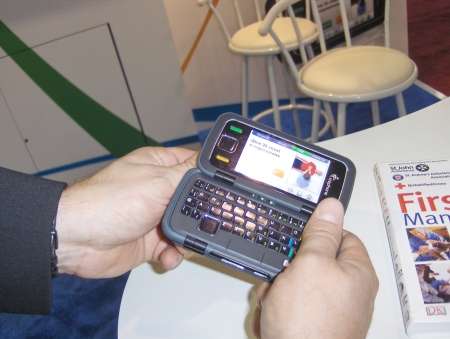 Touchscreen mobiles are 10 a penny these days. And mobiles with keyboards popping out are flippin’ everywhere. But the iCEphone adds a third dimension.

The touchscreen is boosted by a keyboard and a third level of controls. It can be used as a candy bar; popped fully open for maximum navigation; or left in a middle position for easy gaming.

That gaming choice still makes use of the extra dimension, though, as the keys now folded underneath can still be used.

“We put the device through focus groups and people pick up the gaming quickly,” the iCEphone spokesman told Absolute Gadget.

The Scottish company behind the handset also has another selling point: the iCEphone could save a life.

Hidden within the Windows 6 device is all the information from the world’s best-selling first aid manual.

When can I acquire the healing power of the iCEphone, we hear you ask?

Well, it will be available in the UK around July or August this year, most likely on the Vodafone network.

The device may cost around £399 before any network discounts – so it still may come free depending on the contract you choose with it.

(More images on the next pages)

This news story was posted using the IPassConnect global wireless and US 3G service. For more details visit the iPass website.