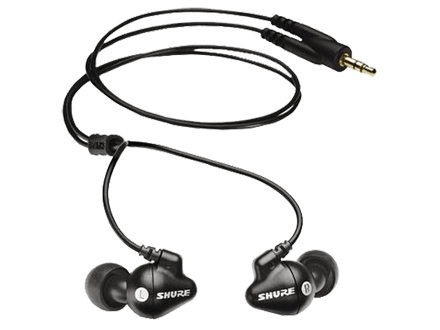 It is a well-known fact that the earphones that come with iPods,
iPhones and other mp3 players and mobile phones aren’t really that much
cop. That’s why there is a booming market for headphones and earphones.
Shure has had many a success with earphones for a long while and its
latest offering, the SE102 earphones, is pitched at the users who wants
something a bit better than what came with the box.

The phones reviewed are black and are pretty much typical of this
design. The earpieces are conical and bulb-like in design but should
slip into the ear with minimal difficulty.

Included with the earphones are four sets of silicone ear tips. One
small set, two medium and a large. However, there are no flanged or
foam tips. The silicone ones provided, while fitting comfortably in the
reviewer’s right ear, didn’t do so in the left ear – leading us to
presume that we might require plastic surgery on our ear in order for
the piece to fit properly.

Sound-wise, it is fairly standard, but a step up from the say the iPod
earphones. One critism of the phones is that in order to get a good
bass experience we had to really poke the buds in, which made our ears
a tad uncomfortable.

Included in the box is a smal soft travel pouch that allows you to
store the phones safely while travelling. The earbuds didn’t seem to
fall off the phones when stored away, so this is a step up from the
manufacturer’s famous e2c earphones.

The cable supplied with the earphones is a little unusual. The cable
runs from the earphones into a 3.5mm gold-plated straight plug in a
usual "Y" formation. There is then another three foot of extender
cable. We were unsure about this set up as for most uses you would need
the extender to use the phones and having another connector usually
degrades sound performance.

Music performance is, on the whole, an improvment on the out-of-the-box
phones that come with mp3 players and mobiles. Bass is only good when
you wedge the phones into your ears. When listening to electronica and
dance music, the sound then tends to sound a little harsh and somewhat
brittle and possibly a little too crisp for our ears.

But for the most part, you will certainly get a marked improvement in
sound quality from the basic phones and the sound isolating aspect
certainly does what it says on the tin. But we can’t help but think
that they aren’t as good as the e2c earphones we’ve had previously.