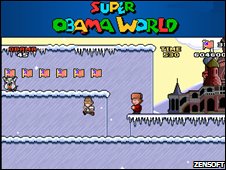 It’s
been said many times that the Internet was crucial to last week’s
U.S. election, with YouTube videos and fansites held up as integral
methods of gaining support for both sides. And no sooner has Obama
won the prize, than he’s had a game made of his exploits.

Super
Obama World, as you’ve probably guessed, spoofs perennial SNES
classic Super Mario World, with the President-elect stepping into the
plumber’s shoes. It has a distinctly satirical bent with a
clear vendetta against Sarah Palin – set in Alaska, it features
Obama collecting flags in place of Mario’s coins, and stomping
Republican lobbyists and a woman with a rack full of clothes who
references the $150,000 allegedly spent on Palin’s wardrobe
(she awards 150,000 points when squished).

Though
both candidates had an online presence, it has been noted that
unofficial Obama fansites and videos were more prevalent than those
supporting John McCain, and, indeed, McCain web content tended
towards mocking him rather than campaigning for him. It’s been
noted that young voters, i.e. those more likely to be net-savvy, went
for Obama more than two to one.