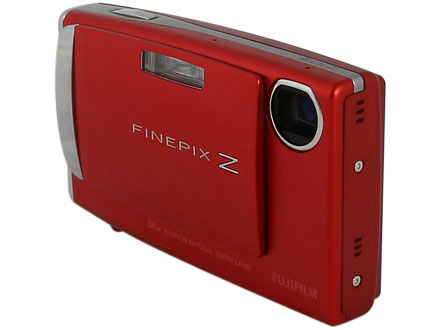 While we just adore the Canon 350D digital camera (whaddya mean that’s
old hat? It’s still a great camera!), there are sometimes when you want
a great camera in a compact body. The new Fujifilm FinePix Z10fd aims
to have you shooting fantastic pictures without weighing you down.

While
the all-plastic construction may have some worried that the thing would
break in a slight breeze, those fears are unfounded, it can take normal
use quite well. Not only that this has to be one of the best looking
compact cameras that has graced us in many a year. We had in for review
a red model and it looked marvellous. You wouldn’t need to feel
unfashionable when you bought this out to take holiday snaps.

Looks
aside, the camera comes with 25MB of internal memory (which means that
it can take only a few hi-res pictures before becoming full) or
alternatively you can shove in a 1GB xD of SD card card to take up to
300 high-resolution pictures. As the camera supports SDHC, you should
be able to put in 8GB or even 16GB cards into the empty slot.

On
the camera are USB and infrared ports for transferring pictures to a PC
(sadly no Bluetooth – but that’s not a deal breaker). Also included in
the box is a wrist strap, battery charger, manual, and CD.

As
said earlier, the looks of the thing are great if the construction
feels a little lacking, when compared to rivals on the top end of the
budget market. On the back of the unit is a 2.5-inch, 150,000-pixel
LCD. this is almost colour perfect although we felt the sharpness was a
little wanting. We tested the camera on bright sunny days in Tuscany
and sometimes the sunlight meant that viewing the display was
difficult. That’s when a normal viewfinder would be a welcome addition.

However,
the light construction does mean that it thin and light enough to slip
the thing in your pocket, which means that you really can take it
anywhere without feeling that you are weighed down. The camera is quite
small, so if you have big hands then it is not such an ideal camera,
but the flip side of this is that those of us with small, delicate,
ladylike hands will love its petit nature.

The layout of the
buttons seems to be well thought out as everything appears to be to
hand for taking impromptu snapshots. The menu gives access to the
camera’s funtions very easily.

The FinePix Z10fd has five modes;
Auto, Manual, Scene, Playback and Movie. Auto and Manual are simple
enough to figure out. While Scene gives the user 15 pre-set picture
settings, such as landscape, portrait, night shot as well as Natural
Light and Flash mode which takes two consecutive shots, one with the
ISO increased to use all available light and one with the flash, saving
users the bother of adjusting the settings themselves.

However,
it is pictures that really attest whether the camera stands or falls.
The 7.2-megapixel camera sports face detection technology as well as
the now-standard red eye removal.

High-speed shooting was a
tad disappointing managing around seven pictures in 10 seconds. But in
normal mode the picture quality was reasonable, well reasonable for a
camera that costs under £100. Colour was good and saturation was
vibrant and smooth. At higher ISO settings (800 and 1600) there was
appreciable noise on pictures, but below that it was acceptable.

While
the pictures are good enough, the looks will be the features that bring
the punters in. It does stand out compared the its rivals and in these
celeb-obsessed days sometimes looks are all that matters.