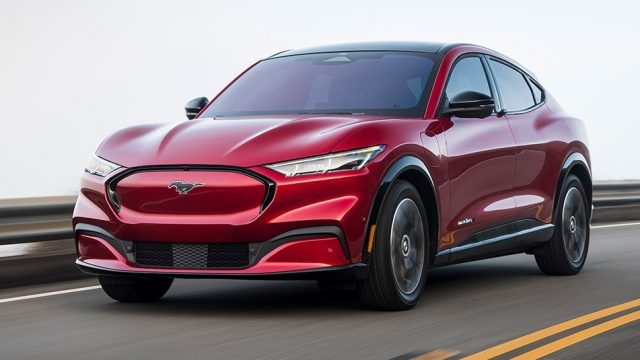 Not everyone is enthusiastic about an electric car yet. But stick a Mustang badge on it and give it a sharp look, and suddenly everyone turns their heads. We went out with a huge attention grabber: the Ford Mustang Mach-E.

For as long as I can remember I have been crazy about cars and motorcycles. Not a technician or mechanic, but always looking for something special The Ford Mustang Mach-E (2021) is finally in the UK. can this electric SUV proudly bear the Mustang name?

Whether or not it is a real Mustang, you can decide for yourself. But at least he has the looks. Especially the elongated hood is impressive. Not only when you are standing in front of the car, but you also cannot miss the hood behind the wheel either. It is always in sight, so you quickly get the feeling that you are in a real American ‘Pony Car’. Smartly done by Ford, because you do not get this feeling in the neat family SUVs of the competition.

More than a year after the unveiling of the Mach-E, the electric version has finally entered the UK. The designers had a thankless job: the Ford Mustang is an iconic sports car, which featured in famous films such as Bullitt and Gone in 60 Seconds.

The eight-cylinder was part of the magic of the car. There you are in the design room and you must draw an electric model worthy of the name Mustang. It is commendable that they did not opt for cheap effects: the Mustang has not become a retro design.

The Ford Mustang Mach-E stands on a new platform for electric cars. In theory, five people will fit in, but really four is the maximum. This is truer if you have the optional panoramic roof, the headroom is then limited.

In the rear, there is room for 402 liters (about half the volume of a large refrigerator) of luggage space and 1,420 liters (about twice the volume of a large refrigerator) with the rear seats folded down. Because the roofline – as you would expect from a Mustang – is quite sporty, you must consider that large high items will be difficult to fit in the trunk.

The Mustang Mach-E is packed with hip technology. Not only in the interior – we will get to that in a moment – but also on the outside. There are no door handles. Instead, there is a round button on each door that you can press. The door will then automatically come out slightly, after which you can open it further yourself.

You can of course open the car via the car key, but also via the FordPass app. If you have forgotten your car key and your mobile is empty, you can also press a pin code via a keypad on the B-pillar to open the car.

The large screen in the center console seems to be a nod to Tesla. The touchscreen can be operated intuitively and thanks to the latest Ford Sync technology, updates can be performed over the air (so remotely, without having to go to the dealer).

The range is of course calculated according to the WLTP test. In practice, you can get about 50 to 100 kilometers from it and even more during a severe winter. It is, therefore, a wise choice for Ford to provide the car with a large battery pack because even the ‘small’ battery pack is not exactly small. This way you can drive carefree, and you do not even have to connect the car to the charger every day unless you drive across the country all day for work.

Fortunately, you can always fast charge. This is possible with the large battery pack of up to 150 kW. The battery is then filled from 10 to 80% within 45 minutes. The smaller battery pack can charge up to 115 kW DC and takes about 40 minutes to 80%. Charging at home or a public charging station is possible up to 11 kW. This way, the Mach-E is completely ready after a night of charging.

The battery consists of pouch cells, so flat batteries, which are housed in different packs in the bottom plate. These are modern NMC cells, consisting of lithium-nickel-manganese and cobalt oxide. The exact ratio, such as 811 or 622, Ford could not tell us, but these are the ones that are also used in the Ford Transit plug-in. The cells are suitable for fast charging with a peak power of 150 kW. If the battery is empty, 95 km (about half the distance from Washington, D.C. to New York City) of range would have been added in ten minutes. As the battery becomes fuller, the power decreases, so from ten to eighty percent, charging takes about 45 minutes. This will get faster in the future, Ford said. The internal charger for the European market can handle three phases, which means that ac charging stations at home or on the public road can be recharged quickly with 11 to a maximum of 22 kW.

In the interior, one thing immediately stands out: the gigantic 15.5-inch touchscreen. It is bigger than the Polestar 2 and even bigger than the Tesla Model 3. The latest Ford SYNC system runs on it and is very uncluttered. You never need to tap the screen more than once or twice to get to where you want to be.

You can easily pair the Ford SYNC system with your phone. This way you can not only enjoy your own music, but you can also see from a distance where the car is and what the range is. You can also set charging times and preheat or cool the car. Of course, you do this while you are still sitting at the breakfast table at home and the car is still on the charger. This way you get into a nice heated or cooled car and the battery remains fully charged.

The car is equipped with integrated cameras that are hidden in various locations. Together, these cameras show a 360-degree view all around, so that you can look at the car from above when parking, for example, and you are less likely to overlook a pole. This system is also in many other cars, such as the Nissan Leaf. The cameras are also used for semi-autonomous driving. According to Ford, the Mach-E is so stable that you can safely take your hands off the wheel while driving. This is not allowed by law, because then it cannot be checked whether the driver is still paying attention to the road. That is why the Mustang Mach-E, just like the Tesla Model 3, is equipped with a camera that monitors the position of your eyes. With the Mach-E, it is directly above the steering wheel, at least in two of the three test models. This should help make hands-free driving legally possible faster. In the US, Cadillac has been using such a system for some time.

We took the 351 hp Mustang Mach-E AWD Extended Range on a long journey to the seaside. The tuning of the Mustang Mach-E is firm but balanced. The Mustang Mach-E has three drive modes, which adjust the power distribution of the four-wheel drive and the directness of steering and accelerator pedal, but the dampers remain the same in each program.

Once on the road, the car was very stiff, but I have been driving with air suspension for more than 10 years. I told myself that it is a sporty set-up that belongs to a Mustang and by now I am completely used to it.

The top speed is limited to 180 km/h. Thanks to well-thought-out thermal management, Ford promises that you can smoothly ride the autobahn for 30 minutes at top speed.

Apart from the name and appearance, the Mustang stands out mainly because of its technical specifications. They are not necessarily revolutionary, but Ford has clearly done its best to make the car attractive to a wide audience, without compromise.

It has a long-range, plenty of space for passengers and luggage, a modern interface with over-the-air updates, support for Android Auto and Apple CarPlay, and fast charging speeds for home and along the highway. With a price of fifty thousand euros, it is not cheap, but for what it offers and the size of the battery pack, it is very neat compared to the competition.

This seems to be one of the most interesting newcomers of 2020. Whether the lofty expectations are fulfilled, and Ford can produce enough cars, we must wait and see. This is just a first impression of three pre-production models. For a first impression, we think the Mustang Mach-E is successful.