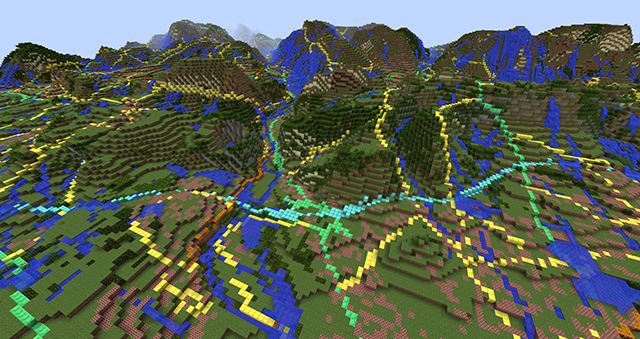 The latest thing to be built in Minecraft (or it would have been, were it not for the fact that twenty skyscrapers, thirty-five temples and three planets were completed in the time it took you to read that sentence) is a recreation of Great Britain.

The map, the work of the British Geological Survey (BGS), can be downloaded from their website for free – you just need a PC version of the game and 6GB of free space.

The basic overworld map was actually created by the Ordnance Survey last year – the BGS’s version uses it as a starting point but goes into further detail underground. Whereas the OS map was just a visual representation of mainland Great Britain and some surrounding islands, the BGS’s creation indicates what sort of rock is underneath the surface. Using different types of Minecraft blocks for their appearance, characteristics or both – so Obsidian blocks stand in for basalt, Soul Sand mimics the quality of peat, etcetera – the team has essentially built one massive geology lesson. (The link above goes into what blocks represent what rock types.)

“The Minecraft blocks were produced using data from the BGS’s soil parent material map,” the British Geological Survey explained. “In the UK, parent materials provide the basic foundations and building blocks of the soil, influencing their texture, structure, drainage and chemistry.

“By using the parent material data BGS holds it’s possible to get a general understanding of the types of geology found across Great Britain which is then translated into Minecraft blocks.”